“I’m Just Here For The Gasoline.”

Posted on January 12, 2011 by mygeekblasphemy 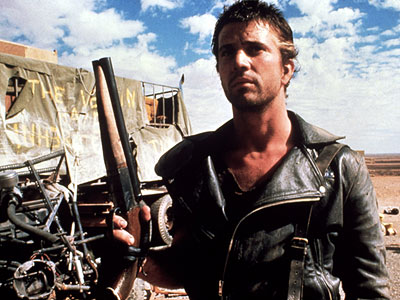 Maybe a year or two ago, Mek and I decided that we wanted to try out the first Mad Max. So we rented it, and I . . . really didn’t like it very much at all. I know. I did like some of the concepts in the film, but as a whole, I found the movie to be exceptionally slow, and I really only enjoyed the last fifteen to twenty minutes. So, yeah. Not exactly a fan.

But then I heard that the sequel was supposed to be amazing, so Mek and I decided to try out the Mad Max series again . . . only we picked up Mad Max: Beyond Thunderdome by mistake, and . . . wow. If ever a movie was suffering from split personality disorder, it’s Mad Max: Beyond Thunderdome. Tina Turner, Mel Gibson, and The Lost Boys. Now, there’s a movie pitch I wish I could have heard.

So, my enjoyment of the Mad Max films has been kind of . . . ehhhhhh. Still, I wanted to give The Road Warrior a chance, and, ultimately, I’m glad I did, because it was easily my favorite of the trilogy.

1.) One of the problems I’ve had with the Mad Max films is my general inability to hear them properly. Part of that’s my own difficulty with accents . . . I go crazy for a cute boy with a good accent, but I do have a lot of trouble distinguishing words when they aren’t enunciated perfectly . . . but a lot of it also has to do with the film’s poor sound quality. The dialogue in The Road Warrior is relatively sparse . . . I’d appreciate it if I could make out more than a third of what there is to hear.

2.) That being said, though, I don’t have many other serious problems with the film. I do think that the first fifteen minutes are a little slow . . . but that’s not a major problem because once Max finds his way into the oil refinery, I’m all into it. Of course, this may be because my favorite character lives at the oil refinery: The Feral Child. 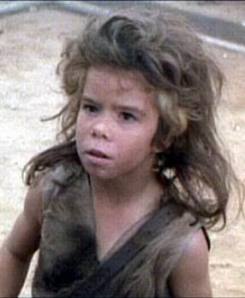 This is one kid that you do NOT want to piss off. 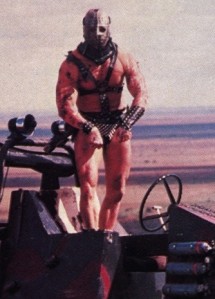 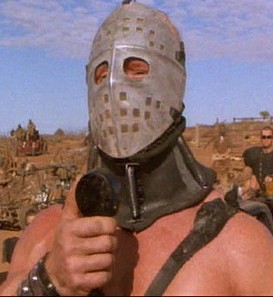 What the hell is up with S&M Shredder? My childhood nostalgia has been taken to the creepy and naughty place, and I don’t approve at all.

5.) I know there’s a tough love school of thought when it comes to persuading someone to become a better person . . . but I’ve got to tell you, if someone called me both garbage and a maggot in the same breath, I can’t say that I’d be terribly inclined to help them. Maybe that’s just me, though.

6.) One of the things I do love about this movie is that Mad Max isn’t really ever redeemed or transformed . . . he’s not entirely without humanity (read: quickly established bond with feral child) but he also never has one of those moments when he realizes the Error of His Ways and gives an Inspiring Speech and Sacrifices Himself For His Fellow Man. The good things he does are also usually self-serving, even in the end, and I liked that a lot.

7.) I also greatly enjoyed the sudden bits of violence and gore in The Road Warrior. It was never too much or too over the top. You’re just watching the movie, enjoying some post-apocalyptic landscape, some bizarre costumes, some Australian mumblings, and then suddenly FINGERS HAVE BEEN SLICED OFF! MY GOD, FINGERS HAVE BEEN SLICED OFF—and then we’re back to post-apocalptic landscape, bizarre costumes, and Australian mumblings. I liked the balance.

8.) I thought I recognized one of the characters, The Warrior Woman, but I didn’t give her much thought until I saw Virginia Hey’s name at the end credits. Dude. The Warrior Woman is Zhaan! How cool is that! 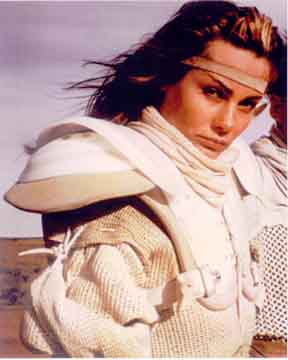 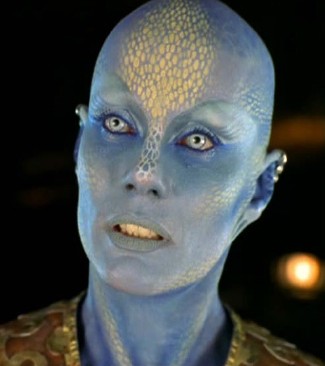 9.) Throughout the film, Mek and I were talking about Comic Con costume ideas, and I suggested that she could be a female Mad Max, which could be kind of fun. I was briefly playing with the idea of being a female Wez . . . not that I could pull a real mohawk, but a bright red faux hawk might be kind of fun . . . but then I noticed Wez also wears assless chaps, and that kind of put an end to that.

10.) Finally, no matter what kind of story you’re in, it’s always a good idea to get a dog that’s completely loyal to you. It will help to keep you human; more importantly, it will likely save your life.

All in all, I thought Mad Max 2 was pretty fun. Crazy outfits, neat landscape, good plot, cool action scenes. I’m not sure that I loved it the way everyone else loves it, and I do think that the beginning started off a bit slow, but all in all, I thought it was a good time and way better than either of the other movies in the series.

Tentative Grade: B (I have a feeling this might go up to a B + with additional viewings, but I’m not sure.)

Moral of the Story: Make friends with the dude who has the gyro-copter. He’ll save your ass repeatedly, even after you continuously reject him.

This entry was posted in SLIGHTLY LESS EPIC REVIEWS. Bookmark the permalink.

3 Responses to “I’m Just Here For The Gasoline.”