I was talking to a co-worker recently about horror movies, and she was shocked to find out that I hadn’t watched either of the Paranormal Activity movies yet. I was genuinely interested in the first one when it came out, but I never got around to seeing it in theaters, and I’ve since grown very tired of all the cinema veritae and mockumentary-styled horror movies out there, even though there are some very good examples of the subgenre (Rec and Cloverfield being the most obvious examples).

This block against shaky-cam has been enough to keep me away from Paranormal Activity (at least for the time being) but it wasn’t enough to deter me from watching the horror-comedy mockumentary, Behind The Mask: The Rise of Leslie Vernon, which is an indie film about a documentary crew who follows around an aspiring serial killer in a world where Jason, Freddy, and Michael Myers are all very real. 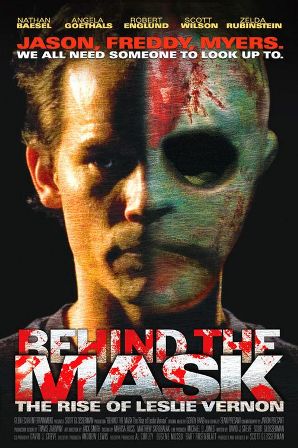 I don’t know if anyone besides a horror buff would really appreciate this film, but for those of you who like your scary movies served with a pinch of comedy and a dollop of meta . . . well, Behind the Mask might just be the film for you.

Leslie Vernon (Nathan Baesel) wants to be the next big horror legend, and he invites Taylor Gentry (Angela Goethais) and her film crew to document his first real reign of terror on the town of Glen Echo.

1. Behind the Mask is funny, but it’s not what I would consider a parody . . . although, this naturally depends on how you define the word “parody”. For me, parodies tend to be more overtly ridiculous. Scary Movie, for instance, is an obvious parody. Scream, on the other hand, is not.

Behind the Mask and Scream are somewhat similar in how they poke at and play with horror movie conventions. The main difference is that Scream is still a horror movie at its heart, and it’s still trying to scare you. Behind the Mask is clever and funny, but there’s nothing remotely scary about it. I guess maybe I would call it a smart parody, then. It doesn’t make you jump in your seat, but it does make you laugh . . . and actually think, occasionally.

Someone who watches horror films infrequently might like Behind the Mask . . . I’m sure they’d get some of the jokes, and I don’t know who wouldn’t like Leslie Vernon . . . but I doubt they’d catch most of the references, and I’d expect the film would be too slow for them. On the other hand, anyone who can quote Randy’s Rules by heart and loves slasher films from the 70’s and 80’s should definitely watch this movie. Meta rules!

2. Without a doubt, the star of this show is the serial killer himself, Leslie Vernon. Taylor’s okay, and the interactions between the two of them are interesting enough, but Baesel puts so much energy into his performance that you can’t help but start rooting for Leslie to succeed in his life’s work. He’s so excited and passionate about his plan. He also hops around like a monkey, which is crazy fun to watch.

3. A bit of random trivia for you: Taylor is played by the same actress who played Linnie in Home Alone.

It’s weird, how as you get older everyone gets older with you. Like, you see pictures of Haley Joel Osment now, and you’re like, But he’s supposed to be that cute, little kid who can see dead people. He’s not supposed to grow up! Or when actors you’ve watched for years suddenly pass away, cause that never stops being strange and sad. When I was young, I never recognized anyone on the In Memorium section of the Oscars. Now, it’s like, Jesus, he died too? What the hell, man? Really?

It seems like there are certain people who are just supposed to stay young and beautiful forever. The realization that this is not true is almost as upsetting as trying to play video games when you’re twenty-five and realizing that your butt hurts after a whole ten minutes of sitting on the hard living room. It’s hell to get old (although it does beat the alternative.)

4. One of the only real problems I had with Behind the Mask is this random shot of this girl’s boobs. It’s supposed to be funny—Taylor voiceovers that the image is gratuitous—but the voiceover seems startlingly out of place, like the whole joke belongs in a different movie. There are some panties shots that I can, heh, get behind, but the boob thing was just weird and distracting and actually a little off-putting. And, frankly, they looked kind of weird. If I have to stare at some lady’s tits close-up, shouldn’t they be, like, better ones?

5. Of course, this was a very small flaw in an otherwise very intelligent, low-budget film. What really makes this movie work is one, Nathan Baesel’s performance, and two, the whole script. I really liked the dialogue in this one. Some favorite quotes:

(on how to survive a horror movie villain)
Jamie: “Never hang out with a virgin. If you’ve got a virgin in your crew, either get somebody in her pants or get the hell away from her.”
Eugene: “Aside from that, the simple answer is run like a motherfucker and don’t stop till the sun comes up.”

Leslie: “You have no idea how much cardio I have to do. It’s ridiculous.”
Taylor: “Why so much?”
Leslie: “Well, you oughta be able to run like a freaking gazelle without getting winded. Plus, there’s that whole thing of making it look like you’re walking when everybody else is running their asses off! And I gotta stay with ’em! It’s tough, man.”

6. Both Robert Englund and Zelda Rubenstein make cameos in Behind the Mask. I wonder if Mr. Englund ever gets tired of doing horror movie cameos. I hope not. It seems like a fantastic way to make money. If I could have a career doing nothing but cameos in scary movies, that would be awesome.

And Mrs. Rubenstein, RIP. I mean this in no way as a disrespect—I am a huge Poltergeist fan, and I have to say, “This house is clear” at least once every three months—but wouldn’t Zelda Rubenstein be the best name in the world for a cat? I think it would. I should start making that list, too.

7. There isn’t a lot else for me to say about this movie without getting into spoilers, which I don’t want to do. (And if you don’t want to be spoiled, stay away from the trailer. On one hand, it did get me interested in the movie, and that’s the job of any good trailer. On the other, it pretty much tells you what’s going to happen, and while I don’t know that anything’s a huge surprise, it would have been nice not to know exactly how the movie was going to play out.) On the whole, though, I really enjoyed Behind the Mask. It’s sharp, funny, and very playful. Just what I wanted it to be.

What doesn’t kill you makes you stronger.

Also: sometimes, being a virgin actually pays off.