Originally, I intended to see Drive Angry in theaters because it looked hilarious. For some reason or another, though, this never happened. (I suspect I couldn’t go the first week, and it had disappeared by the second.) So awhile ago, I remedied this travesty by renting the film from Netflix.

Ultimately, it’s very enjoyable. But only if you like cheese.

John Milton (Nicholas Cage) busts out of prison to save his infant grandchild from the same crazy cultist bastards that killed Milton’s daughter. Spunky Piper (Amber Heard) and her super awesome car aid him in this quest. Meanwhile, The Accountant (William Fichtner) is on Milton’s trail, determined to drag him back to jail . . . and not overly concerned with anyone who gets killed along the way.

1. When I got this DVD in the mail, I glanced at the plot summary and frowned. While everything they said was more or less factually true (I still take some issue with describing the Accountant as a serial killer), it certainly seemed . . . skewed, like the Netflix execs wanted to trick people into thinking they were watching one kind of movie, when they were actually watching something from a different genre entirely.

However, when I started watching the film, I realized that this thing I thought everyone knew from the get-go isn’t explicitly stated for at least half the film, so . . . I have erred on the side of caution and used a similarly non-descript summary. I swear, I’m not lying, just . . . leaving stuff out.

2. Okay, disclaimer done. Now. Drive Angry has some stunningly bad special effects. I’ve got to get that out there. They are terrible. They are laughable. They are 90’s-esque graphics in a 2011 film. I wish I had some photographic evidence for you, but sadly, I do not.

3. The acting, on the other hand, all averages from pretty decent to pretty awesome. 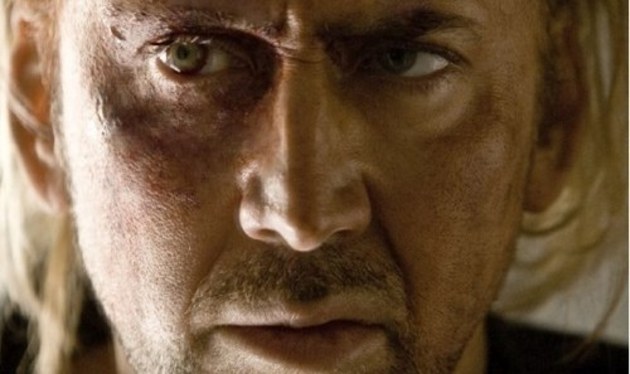 Nicolas Cage is pretty good. He has a couple of lines at the beginning that rang awfully flat to me, but after that he’s much more enjoyable. He has a few nice moments with Amber Heard, and there’s even one point in the film where you remember, Oh, right. Nicolas Cage actually CAN act. It’s just hard to remember that after the last, oh, decade or so of crazy ass movie choices. (Kick-Ass always being the exception.) His pain is convincing as he stares into the fire, talking about this horrible thing he saw that no parent should ever have to see . . . although I must say, the strange wide-legged stance he has while talking about this? Yeah, not really sure what’s up with the wide-legged stance of angst.

Awesome. Just awesome. I absolutely love William Fichtner—he makes the most out of small, badly written, or just crazy ass roles—and I’m desperate for him to get a part in a movie or TV show that is worthy of his talent. Here, Fichtner just has all these little tics and gestures for the Accountant that I adore. His delivery is perfect. LOVE. 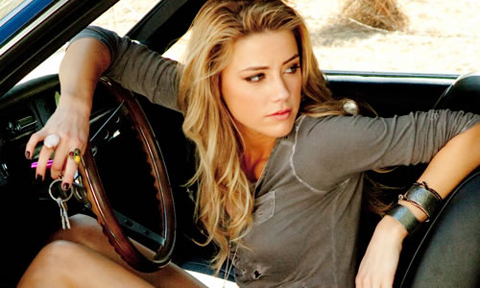 Amber Heard is also surprisingly good. When I saw the trailer for this movie, I was like, Yay, another supposed badass blonde. I’m sure she won’t be whiny and annoying for the entire freaking movie. But much to my surprise, Heard’s actually pretty good here. I certainly find her believable enough. She doesn’t pout through all of her dialogue, and she doesn’t look absolutely ridiculous attempting to punch someone. Frankly, that’s a lot more than I was expecting when I started the movie.

There’s only one part that really annoys me about Piper. Screenwriters have this habit of trying to make their heroine so badass that she ends up becoming an unlikable bitch that no one in their right mind would ever want to hang out with. This is mostly avoided with Piper . . . except for one scene, where she invites a guy at a bar back to her motel room . . . so she can order him to paint her toenails and otherwise mostly ignore him. I mean, come on. Honestly. Even I felt bad for this guy.

Billy Burke plays our villain, Jonah King. With a name like that, I expect poor Jonah was destined to end up an evil, baby-snatching, literal lady-killer cult leader.

Burke is pretty good in this movie. I think some talent is required to balanced out the pure cheese that is Jonah’s character, but Burke does it decently enough. He easily has the silliest of all the roles in this film, but I found him enjoyable to watch on screen. Not the best cinematic villain, certainly, but far from the worst.

4. What I really liked about Drive Angry was that I was never bored, ever. I’ve reviewed a decent number of cheesy action or grindhouse films on this site, and I’ve had pacing problems with almost all of them, some mostly doable (Machete, Smokin’ Aces) and some that killed the film (Hobo With a Shotgun). (Sidenote: I accidentally typed Hobo With A Shogun at first, which I, personally, think is an excellent idea for a movie.)

But I have no pacing problems whatsoever with Drive Angry. It just keeps moving forward, and I was entertained the entire time while watching it. This isn’t, like, high art or anything, but it’s fun, and I never looked at the clock, trying to guess how long I had before the movie was finally over. That’s worth something.

5. Although, I can’t say I cared for the big sex scene. Some people are calling Drive Angry a grindhouse film, but I do make a distinction between grindhouse films and just silly bad action movies, and the majority of Drive Angry is just a silly, bad action movie to me. The sex scene doesn’t belong. It doesn’t quite match the tone of the film. More importantly, it just seems like it’s trying way too hard to be overtly ridiculous.

6. I did enjoy Tom Atkin’s small part as a vengeful cop, though. His whole (paraphrased) ‘and by aim for their tires, I mean aim for their heads’ thing? Priceless.

7. Finally, I love it when this happens in a movie: a character says something stupid, I respond with great wit, incredulity, or both, and then another character says the exact same thing I said two seconds later. In Drive Angry, Piper is scared and frustrated with John Milton, so she says, “Gimme one good reason I shouldn’t shoot you in the face.” So I can’t help but throw out, “Well, he is driving,” and a few seconds later, Milton reminds her, “I’m driving.”

Okay, so remember how I mentioned that John Milton broke out of prison? Yes, well, that prison is Hell. Like, literally Hell. I mean, I thought that was in the trailers, but you know, I did hear about this for the first time at Comic Con, so maybe I got spoilerish footage ahead of time? Anyway, John Milton is a dead man, and he is pissed.

(Hee. Wouldn’t that be a great tagline? I want to have that job, Tagline Writer. I think I could do it. Shit, who couldn’t? Anything’s better than Titans . . . Will . . . CLASH. Honestly.)

Now, here’s something I didn’t know from the trailers: the Accountant is not the bad guy. When I rented this movie, I assumed that I would spend most of the film rooting for him against Nicholas Cage, while simultaneously trying to steel myself for William Fichtner’s inevitable death. About halfway through the film, however, I realized that this would not be the case.

See, the Accountant is not such a horrible guy. In fact, according to him, neither is Satan. “Satan,” he says, “is simply the warden of a very large prison. Quiet man, actually, thoughtful and he’s well read. And I happen to know that the idea of sacrificing children in his honor annoys him greatly.” See? Notice any parallels there?

The Accountant’s job is to get Milton’s ass back in Hell, but that doesn’t mean he can’t let Milton save his grandchild first. Which Milton does . . . with assists from Piper, the Accountant, and a giant ass gun that can actually kill a god. Milton uses said gun to kill Jonah, and I wish I had a picture to show you how awful the effects are here. Honestly. I laughed so hard. I also laughed pretty hard when Milton actually drank beer from bits of Jonah’s skull (he had promised to do so earlier, although I suspect many weren’t taking him, you know, literally), but not because that was bad. Because that was awesome.

Also awesome: the Accountant. I’m sorry, I cannot praise this guy enough. In probably my favorite part of the whole movie, the Accountant talks to the one surviving cultist after Jonah King dies. She’s supposedly the nice cultist who looks after the abducted baby, but while she clearly doesn’t want to kill the kid, she just as clearly wasn’t going to stop Jonah, either . The Accountant comes up to her and asks, “I’m curious. Would you have killed the baby if he asked?” When the cultist can’t answer that, the Accountant just nods and says, “Thought so. See you soon.” LOVE.

Meanwhile, Milton gives the baby to Piper and makes her promise to take care of the child before dying. Well, pretending to, anyway. It’s kind of hard for the dead to die, in this movie. Piper should catch on because she’s seen him bounce back from being shot in the freaking eye, but you know, she’s had a hard couple of days. We’ll let it slide this time.

Then, the Accountant and Milton drive back to Hell, oddly buddy style, like I just kept expecting one of them to say, “I think this is the beginning of a beautiful friendship.” Which, no complaints. I would totally watch a sequel starring these guys. Hell, I would watch a spinoff movie just about the Accountant.

Just, maybe we could make the effects a teensy bit better? Cause between the overly CGI-ed car scenes, the terribly fake head of Piper’s dead boyfriend, the portal-thing Jonah explodes in, and the whole ‘bridge to Hell’ shot . . . this is, like, easily the Worst Effects Movie of the Decade.

Don’t mess with a man’s grandchild. Even if he’s in Hell. The grandfather is a fearsome creature, and make no mistake: he will blow your ass up and drink from your fucking skull.

5 thoughts on ““I Never Disrobe Before Gunplay.””