I have cable with Comcast, mostly because I don’t really have any other choice, and Comcast will, on any given day, drive me completely nuts. They screw up billing all the time, and their customer service is really for shit. They’re also just as expensive as all hell. If there was another option at my apartment, I’d probably have switched over by now.

But as much as they often annoy me, I really do love my Comcast On Demand. It’s given me FearNet, which obviously I cherish. It’s also allowed me to rent the horror-comedy Tucker and Dale vs. Evil a few months before DVD release.

And I had a lot of fun with this one.

Tucker and Dale (Alan Tudyk and Tyler Labine, respectively) are just two nice rednecks trying to enjoy  their new “fixer-upper” summer home in the middle of the woods, when a bunch of college kids attack, convinced that they’re serial killers who have kidnapped their friend, Allison (Katrina Bowden). Hilarity and gore ensue.

1. I’m not sure how much I have to say about this one, other than I really enjoyed it. There’s something keeping it from being in the class of, say, Shaun of the Dead or Zombieland, but it’s really very clever and funny, and I would very much like to own it.

My biggest complaint isn’t about the movie at all, really, but the marketing. The trailer (which, unfortunately, I did post on this blog) shows you half the damn movie, including some of the funnier bits that would have been a little more enjoyable if I hadn’t been anticipating them. My advice: if you like horror comedies, and you haven’t seen this trailer yet, don’t watch it. Just go rent the movie so you aren’t spoiled for everything that happens.

2. Especially one bit. There is one scene that—even though I knew it was coming—still made me laugh so hard that I actually had trouble breathing. (Admittedly, I’m getting over a bit of a chest cold. Still. It makes me smile just thinking about. Hee hee hee . . . gore.)

3. One of the best things this movie has going for it is acting. All the college kids are funny—there are some great reactions in this group—but Alan Tudyk and Tyler Labine are clearly the standouts here.

Alan Tudyk . . . I love Alan Tudyk. I’ve never not liked Alan Tudyk. He’s just awesome and expressive in pretty much everything he does—Firefly, 3:10 to Yuma, Death at a Funeral, Dollhouse, Knocked Up, A Knight’s Tale, etc. Even if the role is tiny or totally random, he makes it work. (Can we say Steve the Pirate!) And what I really like here is how Tudyk completely doesn’t play to type. Just listening to him is a talk is kind of a kick. His voice is so deep and so not what I expect when he opens his mouth. Tres cool.

And Tyler Labine is pretty awesome, too. The only thing I really know him from is Reaper—which I only saw a few episodes of—but I liked him here a lot. Dale is . . . well, I don’t want to say he’s the more serious character, exactly, but he’s the more vulnerable of the two, the one that you kind of relate to . . . as much as you can relate to a kinda slow (but also bizarrely brilliant) hillbilly who thinks its normal to go talk to a bunch of college girls with a giant ass scythe in his hands.

4. Dale’s insecurity and his friendship with Tucker gives this film a small amount of heart. Not too much heart—this is still mostly a movie about people managing to impale themselves because of simple prejudice and miscommunication—but just enough to make the movie more than a one-joke story that gets old after twenty minutes. If Alan Tudyk and Tyler Labine weren’t as good as they are, it might not have worked, but since they are that good, it’s kind of awesome.

5. Katrina Bowden is pretty fun too. 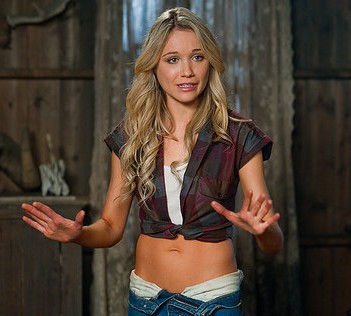 As Allison, Bowden gets to play the Nice Girl in the group—you know, the sweet one who wants to help people, the one who empathizes with the “evil hillbillies”, the one who normally screams SOUL SURVIVOR in huge, neon letters. It’s kind of a tough role to play, actually, because she’s very clearly a stereotype to make fun of, and yet the actress has to play her pretty much straight. I think Bowden does well with it. I like her scenes with Tyler Labine. They’re sincere without being syrupy, funny without being mean, and it just gives the movie something else to work with besides a bunch silly gore. 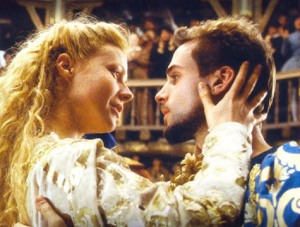 Think about how much better this movie would have been.

6. A few quotes for your reading pleasure:

Tucker: “I know what this is. This is a suicide pact. These kids are coming out here and killing themselves all over the woods.”
Dale: “Ohmygod, that makes so much sense.”

Tucker: “Oh, hidy ho, officer. We’ve had a doozy of a day. There we were, minding our own business, just doing chores around the house, when kids started killing themselves all over my property.”

Dale: “I should have known if a guy like me talked to a girl like you, somebody would die.”

7. Everything else I want to talk about includes spoilers, so let me just reiterate that the concept of this movie is great. I love how Tucker and Dale vs. Evil plays with conventions. Sometimes, it’s a bit of a leap, how the college kids overreact to the things that are happening around them, but there’s a lot for a horror movie fan to enjoy here, the role reversals, the misunderstandings. (I particularly like “He’s making her dig her own grave!” Hee.) It’s not a perfect film, but it’s a lot of fun, and I really enjoyed watching it.

First: the best bit in the whole movie, I think, is when one of the kids tries to attack Tucker and ends up leaping headfirst into a wood chipper.

Oh my God, I was dying. And Alan Tudyk’s reaction, from the screaming to the, “. . . are you okay?” Jesus. I laughed so hard, I think I was trying to cough up a lung.

Now, to the rest of the movie. Dale and Tucker rescue Allison from drowning and take her back to their cabin. The college kids very ineptly try to rescue her and pretty much kill themselves in the process. I really love the one kid who’s all, “I could take my truck and get the cops.” And Chad—kind of the de facto leader of the group—is like, “Yeah, if you’re okay leaving Allison to die.” And the first kid’s all, “Cool beans. I’m outta here!” Admittedly, those weren’t the exact words, but they were totally implied, and it cracked me up.

(Of course, first kid loses some points later when he comes back with a police officer and manages to blow his own brains out with a gun, but that’s okay, I guess. These things happen.)

Now, let’s talk about Chad. Unlike most of the kids, Chad isn’t really that freaked out by what’s going on. It seems like he’s been waiting his whole life for this experience, and he’s pretty psychotically happy to throw his axe around and try to kill some hillbillies. Even in an over-the-top comedy, Chad’s a bit on the cartoonish side, and I wasn’t entirely sure about him at first—he felt more like a plot device than a character—but I warmed up to his story when we got his character background.

See, there were some horrible murders in these woods (20 years ago today, of course), and Chad’s the one who knows the ghost story because his parents were actually two of the victims. And I totally love this development, not because you really get any sympathy for Chad—you don’t—but because you can totally see how the story plays as a traditional horror movie from his POV: a group of college kids go camping in the woods, when they’re set upon by the same hillbilly psychos that killed the main character’s father twenty years ago to the day. Oh, and the killers have kidnapped the girl he loves, and now he has to rescue her. That’s so awesome!

We find all this out in a scene where Allison (who wants to be a counselor) tries to have a little therapy session with Chad and Dale, trying to get them to each express their feelings and listen to one another. They sip tea. It’s hysterical. And in general, I just adore the turn in Chad’s storyline. It’s not just that the hillbillies are the good guys here, but that the guy who should be the hero—the victim’s descendant—is actually the villain. I also love that Chad is the one who has asthma. That just tickles me, the villain having asthma for once.

Although, later you find out that Chad’s dad wasn’t really a victim. Actually, he’s one of the original serial killers who raped his mother, so Chad’s, like, part evil. At first, I didn’t exactly care for the twist . . . I didn’t think the movie needed that particularly cliche . . . but I’ll admit, the way Allison yells, “You’re half-hillbilly!” made me laugh, so I let it go.

In the end, Dale kills Chad with chamomile tea and escapes with Tucker and Allison. Tucker gets a few fingers reattached, and Dale and Allison kiss. All is happy in the land of Oz . . . except for the intrepid (read: bitchy) reporter and her cameraman, of course, who go do some snooping and end up being killed by Not-Really-Dead-Of-Course Chad.

Very enjoyable and clever. Sometimes, maybe a touch too ridiculous, but still a lot of fun. It’s not really scary, but it’s not really supposed to be, either. Gory and funny. Good script. Good acting.

B+ (But it might go up to an A- with repeat viewings.)

Appearances can be deceiving. Prejudice is bad. Launching yourself at someone who’s standing in front of a powered up wood chipper is downright stupid . . . but hilarious.

One thought on ““We’ve Got Your Friend!””