The Trekkies were hardly united on this one. I must actually fulfill my duty as tiebreaker this week. Therefore, your least favorite Trek character is . . .

The tie was between Chakotay and Ezri Dax. I’m not nearly as familiar with DS9 as I am with Voyager, but I always got the impression that Ezri got a worse rap than she deserved. I didn’t like her when I was a kid, but that’s probably because I was pissed off that Jadzia left. Anyway, I simply couldn’t pick anyone other than Chakotay, no matter who he tied with, because the first officer is definitely my least favorite character in the Trek universe.

Why? Well, for pretty much the reasons that Pat and Kate already mentioned in the comments section of the poll: Chakotay is not only a stereotype but an exceptionally bland stereotype at that. I don’t really know what he’s there for except to say vaguely spiritual things to Janeway and, occasionally, B’Elanna. Culture in Trek is sort of tricky by the very nature of the universe, but a Native American character could have actually been interesting. At the very least, he could have had a damn personality. Chakotay was a captain in the Maquis, for Godssake. Isn’t a personality, like, a prerequisite for rebellion leadership positions?

With Ezri Dax automatically getting bumped to second place, third place is awarded to a three-way tie between Neelix, Dr. Pulaski, and Harry Kim. Oh, poor Harry Kim. Can you believe he never got promoted, not once, not in seven seasons? Tom Paris got reinstated, demoted, and promoted again in the same span of time. Kim is unloved, I tell you. Course, he doesn’t have much in the way of personality, either.

Lwaxana Troi, Deanna Troi, Travis Mayweather, Wesley Crusher, and Kes all managed to pick up a vote. I have never understood people’s hatred for Lwaxana Troi. I mean, I get Deanna, despite the fact that I like Deanna—she’s got some of the worst dialogue in all of Trek—but what isn’t to like about Lwaxana? Humor? Mud baths? Naked weddings? I’m beginning to wonder if there are some Trekkies out there who simply can’t stand Majel Barrett. Again, TOS is not at all my expertise at all, but . . . is there really anything that terrible about Nurse Chapel? Nobody voted for her in this poll, but the rants I found about her in various forums were stunning. I mean, did she even do anything?

I will leave you with one of my favorite, unintentionally hilarious quotes of all time. 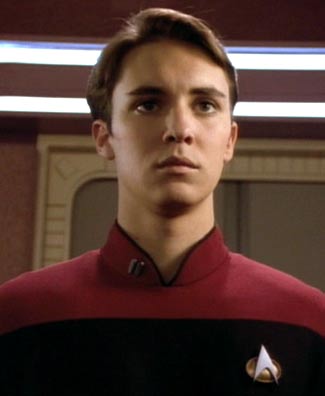