I’ve been neglecting my blog all week because I’ve been sick. And, admittedly, we’re a bit past the Christmas movie season for it to be, strictly speaking, relevant, but my mother finally forced me to sit down and watch It’s A Wonderful Life this year, so I had to write something about it. 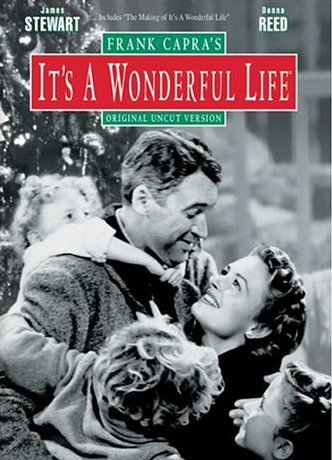 It may not be as horrible as I had feared. Calling it the best movie of all time, though, does seem to be overselling it.

This whole review will include spoilers. Because I suspect 99.8% of you have already seen this movie and, also, I’m still feeling a little lousy. I am both too lazy and too apathetic to bother with a Spoiler Section. Sorry.

1. My mom and I don’t exactly gravitate towards the same movies. I mean, we can agree on stuff. We’re not polar opposites. (And I can watch movies with her that not every parent/child would feel comfortable with. First time I ever watched American Pie, it was with her, and we both laughed our asses off.) That all being said, however, I am a horror/sci-fi/fantasy junkie, and Mama is . . . emphatically not.

But Mama has sat through a lot of movies with me or with my stepdad that she would never have watched on her own. So every now and then, I feel like I should do the same for her, which is why I’ve actually seen movies like Honeysuckle Rose, and why I didn’t put up much of a serious fight on It’s A Wonderful Life.

Despite the fact that Batman: The Animated Series encapsulated my whole aversion to the movie in just two lines.

"You know, I've never seen that. I could never get past the title . . . it's not relentlessly cheerful, is it?"

Yes, respect for my mother. That’s why I watched It’s A Wonderful Life. It’s also why I tried really hard not too snigger too openly at the beginning of this movie. (Although I know I probably failed. For some reason, holding my tongue isn’t usually a problem, but schooling my expressions is just not my strongest talent.)

But seriously, look, I know this movie is old. I’ve watched older movies than this. I’m very aware that special effects in the 1940’s aren’t exactly on par with special effects now, but almost anything would have been better than this twinkling-star-angel bullshit that happens at the beginning of this film. I was dying watching this. I was trying so hard to hold in my giggles. I wanted to roll around laughing.

This scene did not exactly give me high hopes for the rest of the film.

2. Fortunately, things got better. Mostly, I enjoyed It’s A Wonderful Life. And a lot of that, I imagine, had to do with Jimmy Stewart.

I’ve mentioned before that I find Jimmy Stewart’s a voice bit aggravating—there’s just something about it that bothers me—but thankfully I can get past this odd quirk of mine because I like a lot of his movies, and I really did enjoy him in this. He has a certain charm as George Bailey. (Well, when he’s not being sort of an insufferable ass towards his children at the end of the film, that is. All the other parts, though. Much more charming, then.)

I really liked Stewart and Donna Reed together especially. The falling into the pool scene was cute. The walk home from the pool and the honeymoon scenes? Also cute. The two have a very nice chemistry together. 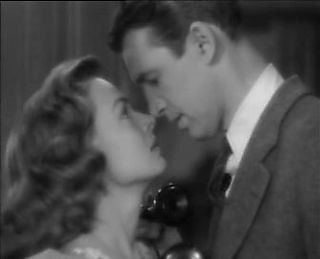 Although if they put any more soft focus on Donna Reed, she might just disappear.

3. I must say, though, that Donna Reed’s character, Mary, certainly seems to lose some spirit towards the end of the film. Good God, lady. When your husband’s acting like an awful, crazy person, send the kids upstairs, okay? They don’t need to see that shit. Stop quavering by the Christmas tree and do something.

She seems even more useless in the alternate reality where George never existed. I mean, I get all the other changes, brother would have died, Bedford Falls would have become Potterville, etc, but why did the mostly enjoyable love interest suddenly become a mousy librarian who’s apparently too scared to even speak?

4. An irrelevant side tidbit: my mom does not call this movie It’s A Wonderful Life. For some reason, she has trouble remembering the title. She calls it the Bedford Falls movie instead. I, on the other hand, can’t keep Bedford Falls in my head for the life of me. I keep trying to type out Bedlam Falls. Which would be an awesome name for a town, honestly.

5. I’ve always had sort of a vague distaste for the colorization of black and white films, but now that I’ve actually seen one? 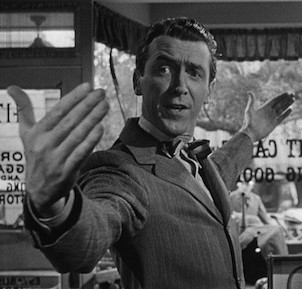 My dislike is no longer vague.

I hated it. I was so distracted for half the damn movie, just by looking at people’s creepy, unnatural skin tones. Black and white films can look so sharp and beautiful. I don’t understand why people do shit like this.

6. I’m also not sure about George and Mary’s choice in names for their children. They seem a touch inconsistent. Peter, Janie, Tommy, and . . . Zuzu? Really? Zuzu?

Okay, Zuzu’s pretty cute. And actually, I kind of like the name. It just seems like, I don’t know, Level One in One Of These Things Is Not Like The Other. Maybe even a Freebie Round.

7. I’m not entirely sure how I felt about the end. Bailout is a bit of a dirtier word than it used to be, but you know, I don’t really mind that the town pulled all their money together and saved Bailey’s ass. It was cool they stepped up. I liked that.

There were a few other things, though, that troubled me a bit:

A. Uncle Billy is never slapped with a big, dead, smelly fish. Seriously, that’s going to be my punishment now for any character who does something so monumentally stupid as wrap up 8,000 dollars in a newspaper and hand it to his mortal enemy. (Yes, yes, I know it was a mistake. I don’t care. Some mistakes are more excusable than others. This is not one of those.) I might even make it a new award, the Character Who Most Deserves To Be Slapped With A Big, Dead, Smelly Fish. It doesn’t quite seem fair that George is going to be held accountable for the fact that Uncle Billy is a moron. I mean, of course, he’s going to lose his business and all, but shouldn’t Uncle Billy be the one threatened with jail time?

After all this good holiday cheer is over, Uncle Billy better not be allowed anywhere near money ever again.

B. George’s friend wires him a line of credit for 25,000 dollars. Seriously, the Uncle Billy thing was just me being me, but this 25,000 dollar thing seems like overkill. The town already bailed George out. Was that not a happy enough ending? Plus, it’s not like I wanted George to go to jail or anything, but wasn’t the whole point of George’s trip with Clarence to show him how much good he’s done, how much meaning his life really had? I kind of feel like that the sheer amount of HAPPY ENDING on this film takes a little away from the actual lesson George learned.

C. The second that the townspeople hear about George’s new 25,000, they don’t immediately go like, “Dude, that’s awesome for you. So. I want my four hundred bucks back. Like, pronto.”

8. I’d have to watch it again to be sure, but It’s A Wonderful Life did feel like it was a little longer than it needed to be. I’m not sure because we had to pause it a couple of times for various reasons, and that could have contributed to it seeming overly lengthy. Still, at some point I was like, Dude, I get it. Every time George Bailey makes to leave town, he gets screwed over. I see, I see, I get the picture. Let’s move on, okay, please?

9. Although, to be fair, I initially assumed that, not unlike A Christmas Carol, the majority of this film would be spent with George learning The Lesson, not on George’s sweet if somewhat tragically repetitive backstory. That made for a nice surprise.

10. Finally, once Clarence came to us in human form, I actually rather liked him . . . but I was pretty tired of hearing about his freaking wings. I was ready to beat him over the head with those stupid damn wings. Or his freaking Tom Sawyer book. Jeez, I had no idea that twinkly BS star angels read Mark Twain on a daily basis.

Enjoyable enough movie, mostly due to the chemistry between Donna Reed and James Stewart, I think. Liked it much more than I thought I would. Not going to replace Die Hard for favorite Christmas movie anytime soon.

CHARACTER WHO MOST DESERVES TO BE SLAPPED WITH A BIG, DEAD, SMELLY FISH:

You’re more valuable than you think you are. (And, you know, don’t kill yourself. That’s no bueno.)

8 thoughts on ““You Call This A Happy Family? Why Do We Have To Have All These Kids?””