I suspect that my faithful readers (you know, the four of you who are out there) get a little tired of my lavish praise for the TV show Justified.

Well, unfortunately, that’s probably not going to stop any time soon because Justified is not only my favorite show on television right now, but almost certainly one of my favorite shows of all time. (It’s so hard to make a top ten list. Do you have take into account the whole series or just the seasons you loved? If I absolutely adored Seasons 1 and 2 of The West Wing but had to finally give up in Season 5 because I felt the show had become unbearable . . . can it still be one of my absolute favorites? TV shows are tricky that way.)

Anyway, today’s TV Stuff is actually less about praising Justified and more about warning audience members not to jinx good characters. This warning is applicable to everyone, not just for those already watching this show, but if you don’t want to see SPOILERS for episode “Coalition,” then best turn away now. 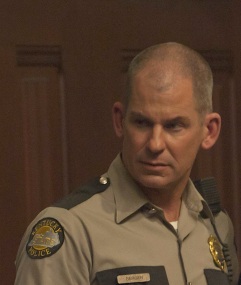 Tom (Peter Murnik) is a reoccurring character on Justified, and he’s kind of casually awesome the way so many side characters on this show are. Mek and I have never talked too much about him in our various watch-and-discuss sessions, if for no other reason than he’s not usually highly pivotal to the main plot, but we have always enjoyed him. Today, as we were watching “Coalition,” Mek offhandedly said something like, “I like that guy.” I nodded my agreement.

Guess who was dead by the end of the episode?

You may think, hey, it doesn’t matter what you said; the show was written and shot months ago, and there was nothing you could say or do to change the outcome. But, like every good superstitious sports fan knows, that’s just a bunch of baloney said by people who simply don’t know any better. If you skipped out on watching the Raiders playoff game to go to your kid’s school play, and then the Raiders lost, it’s not because their quarterback nearly got torn in half in the third quarter. It’s because you were not at home, watching them, like the good little fanatic you’re supposed to be. You could have allowed your team into the Superbowl; instead, you chose to watch your kid singing about sunshine whilst dressed up like a purple donkey. Where were your priorities, man?

I’m writing this warning today to tell you one thing: don’t jinx your favorite characters, at least not the peripheral ones, the ones that the show of your choice does not vitally depend upon. Don’t speak about their long life expectancies. Certainly don’t mention that you like them. Likable side characters only hover around to get axed. The moment you mention you like them out loud? Death! Death, I say!

Mek, you killed Tom. I hope you’re proud of yourself.