So, I just got back yesterday from an intensive six-week writing workshop called Clarion West. I never talked much about Clarion West prior to going — I think I was afraid of jinxing it and having my invitation revoked at the last minute— but I’m going to talk about it now because, well, because I want to. Also because you might notice a few changes on this blog from here on in.

Fear not, people who come here for my movie reviews and mockery. Movie reviews and mockery will not go away anytime soon. I love both far too much to stop now. Film is such a fascinating way of telling stories; I wouldn’t know what to do with myself if I wasn’t constantly watching and overanalyzing the shit out of them. And mockery, well, mockery is integral to my very core of being. I have an overdeveloped sense of snark. It cannot be excised from me.

But Clarion West changed how I look at being a writer, not how seriously I take my own work but how much active charge I need to take in order to turn my passion into a career. So in between posts about cheesy John Travolta movies and Batman worship, you might also see some entries about various writing conventions, different genre markets, and likely some of my own work. Don’t worry. I won’t whine too much about The Novel. Mary Rosenblum, our first instructor at Clarion West, reminded us that nobody wants to read fifty entries about how you’re still stuck on Chapter 3—or, for that matter, about your trip to the grocery store. I have a hard time believing that nobody would want to read 30,000 words about my inner turmoil over Kraft cheese versus, say, Safeway brand, but I’ll suppose I’ll defer to her wisdom for the moment.

And now for a bit about the workshop itself and my experience there.

So, for those of you who know nothing about it: Clarion West is a six week writing workshop that primarily focuses on science fiction and fantasy. Eighteen students are accepted every year for the program. We wrote a new story each week. (Well, the first week primarily consisted of writing exercises to get everyone into the mode of how critiques would go.) We also had a new instructor each week who works in the field as a writer, editor, or both. My instructors were Mary Rosenblum, Stephen Graham-Jones, George R.R. Martin, Connie Willis, Kelly Link & Gavin Grant, and Chuck Palahniuk. I cannot possibly express how incredible of an experience it was for me to learn from these people. Honestly, I’m not even going to try, other than to say that I could actually see my writing improve after one week. After six? Well, let’s just say that while, like snark, my crippling self-doubt cannot actually be excised . . . it can be managed, and I have a lot more confidence in my ability than I did two months ago.

There are other neat Clarion workshops, like the original Clarion which is currently based in San Diego, but one of the things that Clarion West in particular does so amazingly well is to introduce the students to an incredibly supportive writing community. We had parties every Friday night with past alumni and other writers based in Seattle, and meeting these people who have been where you are now was really lovely. I think it’s easy as a writer to feel lost and cut off when you don’t have that kind of support. At least, it certainly has been for me. Writing has always been this huge part of my life that I feel like I can’t share with anyone, and now I have people to share it with, and that’s a wonderful thing.

Which brings me to my seventeen other classmates . . . leaving them yesterday morning to come home was embarassingly emotional. (Read: I cried. A lot.) For six weeks, I’ve lived with these people, critiquing stories, debating movies, eating dinner, playing games, talking about our own various creative processes . . . and I made really good friends. I’m frustrated by my inability to express how good of friends — we bonded isn’t enough; it’s too damn generic. Love is also generic and, worse, it sounds soppy . . . but it’s also true. I miss the hell out of these people, and I’ve been separated from them for less than 48 hours.

Thankfully, we have email. And conventions. And Facebook. And phones. Also, pictures. Lots and lots of pictures.

Me with my short-lived purple hair on the first day. My room had six bunk beds in it. We called it The Smothering Room.

Cory and Greg at the George R.R. Martin reading. 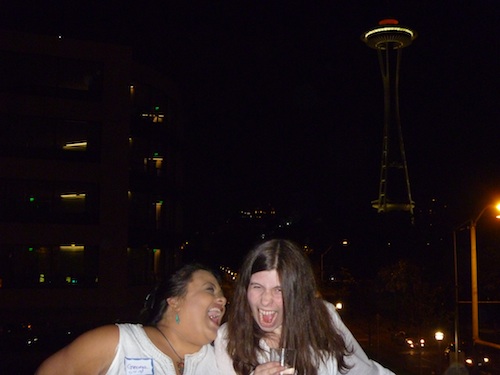 George and Laura. Clearly, the Space Needle is fairly irrelevant.

I’m actually not sure what Helen’s laughing at here, but clearly she’s adorable. 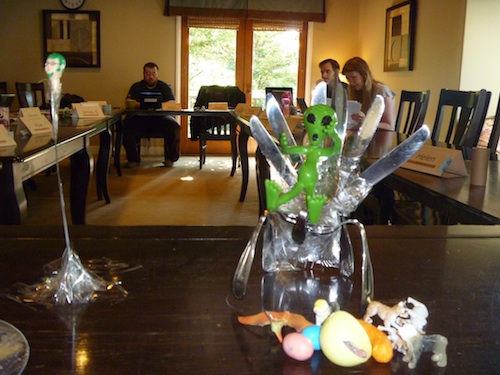 Maybe it’s at the Iron Throne we made for George R. R. Martin. 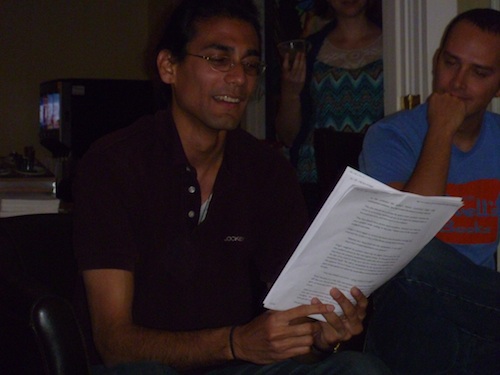 Indra reading The Eye of Argon. 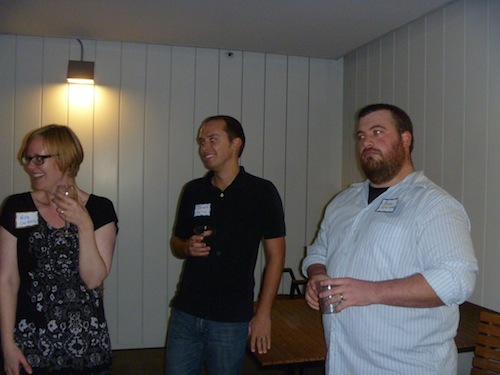 Kim, James H., and Bryan. Bryan is giving his best, “See me after class” face.

About to descend into the horror section of the EMP. 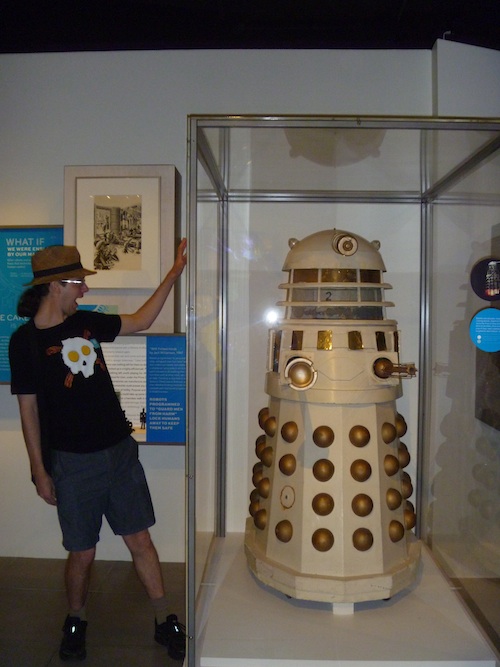 Also at the EMP: James G. and the Dalek.

Look how cute Indra and Nik are. 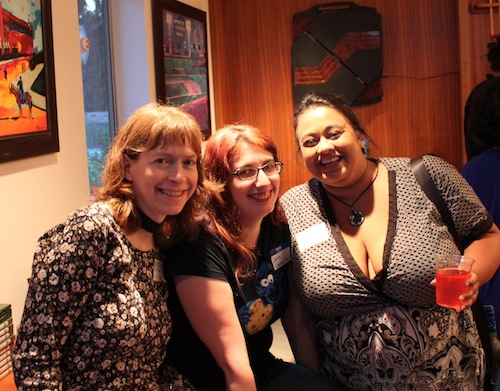 Brenta, me, and George at one of the parties. 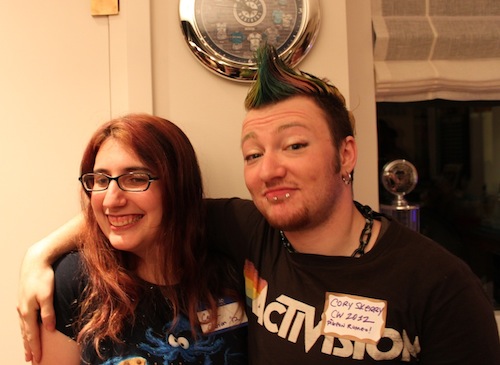 Me and Cory. Cory was my knight in glittery armor.

Sarah and Huw on the dock.

Also on the dock: Alyc and Henry. 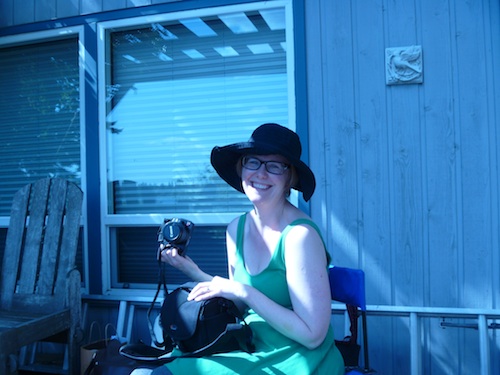 Kim in her adorable hat.

If anybody who reads this blog likes genre work and is serious about writing, I highly recommend that you consider applying to Clarion West next year. The 2013 line-up of teachers is pretty incredible, and the experience you’ll have is so much more everything than I can convey.