As many of my friends could tell you, I’m a bit of a zombie enthusiast. Yet, sadly, I developed my love for zombies late in life (like, in my late teens/early twenties) and am thus still catching up on many classics. For instance . . .

I can’t say I loved this movie the way some people love it, but it was a lot of fun to watch.

Two employees at a medical warehouse accidentally release Zombie Gas into the air. (Okay, it’s not called Zombie Gas, but it might as well be.) Various punks try to fend for their lives.

1. It’s funny to look back and see what movies ended up being so influential that they help inform how we look at a whole genre. For instance, I doubt anyone making The Return of the Living Dead expected this movie to significantly shape zombie canon, and yet it did. If you know anything at all about zombies (that is, you’re above the age of four), you know that zombies like eating brains. But prior to 1985, zombies didn’t appear to be any more interested in brains than they were in, say, kidneys. If you’ve ever held out your arms and moaned, “BRAAAAAAINS,” well, you can thank this film.

And if you haven’t, what the hell’s wrong with you? Come on, man. This guy should be your role model.

2. The Return of the Living Dead is also the first film that I know of to depict fast zombies. I mean, admittedly, 28 Days Later made it fashionable, but there are definitely some zombie sprinters in this movie. Of course, that’s nothing compared to the zombies that talk, and by talk, I mean the ones who request more paramedics and policemen to eat. 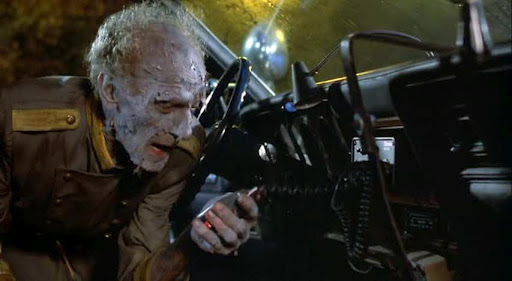 When zombies can order delivery, we’re pretty much screwed.

3. Our main heroes are the most mismatched group of teenagers that I think I’ve ever seen. I mean, they appear to be mostly punks, particularly Trash and Suicide . . . 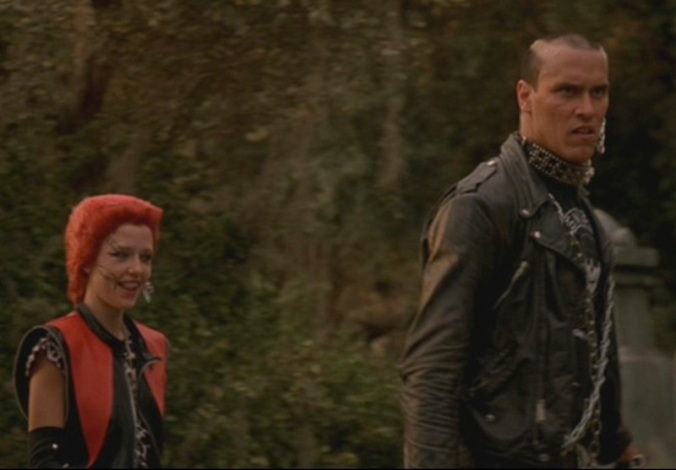 Trash is the redhead who gets off on death and likes to dance naked in cemeteries. Suicide is just misunderstood.

You can’t really see it in this shot, but Tina appears to be using pink telephone cord as a headband. Did I mention I’m glad I barely remember the 80’s?

. . . who looks like she’d fit in better with the Heathers than she does with this crowd. And her boyfriend, Freddy, looks like the kind of guy who would say cowabunga non-ironically. There’s also a fairly stereotypical 80’s nerd named Chuck who I’m pretty sure Trash would eat alive. Admittedly, my friends in high school didn’t all act and dress exactly the same, either, but our group also didn’t consist of five Judd Nelsons, one Molly Ringwald, and one Anthony Michael Hall, you know?

4. I think one of the things that makes this movie is the music. Considering our cast of characters, the soundtrack consists mostly of punk, which is fairly hilarious when paired with our heroes fighting gooey zombies that just won’t die. It seemed intentionally funny, unlike the music in, say, Ladyhawke that you have to suffer through several times before you can learn to love it for just how ridiculously awful it is.

5. I had two favorite characters. One of them, Spider, had the most sense but also probably the worst hair.

Seriously, nobody can rock this look.

Funny note about Spider. (Well, probably funny to nobody but me, but anyway.) I was trying to figure out where I knew him from for half the movie, so certain was I that I’d seen him before . . . and I had. He’s in Jumpin’ Jack Flash for approximately 27 seconds. I’ve just seen that movie so many times that the second I saw the title, I was like, “Oh, of course! He’s the guy who tried to rob Whoopi Goldberg for half a minute! Why didn’t I think of that?”

My other favorite character is Ernie, the mortician, and according to IMDb trivia, he was intended to be a Nazi war criminal who escaped and was hiding out in America.

6. I almost forgot all about my very favorite part of this movie: in the very beginning, we are told, “The events portrayed in this film are all true. The names are real names of real people and real organizations.”

I despise when movies — particularly horror movies — pretend that they’re based on actual events, so that The Return of the Living Dead so boldly lies about a story that’s so obviously not true . . . that’s actually pretty damn funny. Good for you, Dan O’Bannon.

Trash: “Do you ever wonder about all the different ways of dying? You know, violently? And wonder, like, what would be the most horrible way to die?”
Spider: “I try not to think about dying too much.”
Trash (aroused): “Mmmm, well, for me, the worst way would be for a bunch of old men to get around me and start biting me and eating me alive.”
Spider: “. . . I see.”
Trash: “First, they would rip off my clothes.” (Trash rips her shirt off.)
Chuck: “Let’s get some light over here. Trash is taking off her clothes again!”

Spider: “I ain’t in no mood to die tonight.”

Suicide: “Nobody understands me, you know that?”

That’s about it for people who haven’t seen this movie. Everyone else, onward!

The whole mess starts when Freddy and Frank (well, mostly Frank) accidentally release the Zombie Gas, which infects the handful of dead things that are in the warehouse. (It even resurrects a bunch of butterflies and one split dog that squeaks when they stomp on it. Heh.) However, things aren’t too bad, you know, apocalypse-wise, until they call their boss, Burt (Clu Gulager) in. When Burt realizes that destroying the brain does nothing, he decides to take it next door to his pal’s mortuary to cremate it. Unfortunately, the cremation unleashes the Zombie Ashes into the atmosphere, which creates Zombie Rain, and this causes all the dead people in the graveyard to rise.

Various people bite it, including Suicide, Trash, Scuz, and whole scores of paramedics and policemen, who the zombies keep luring out to the mortuary to eat. Frank and Freddy also start turning into zombies thanks to all that Zombie Gas they inhaled. Freddy, rather appropriately, freaks out about this.

Freddy: “Are you saying we’re dead?”
Paramedic: “Let’s not jump to any conclusions.”

Eventually, Frank kills himself by sliding his own body into the crematory. I’d like to say there are easier ways to go, man, but in this one instance, there really wasn’t. Still. Jesus. Freddy, on the other hand, becomes a zombie and tries to kill Tina, who has locked herself in with him because she’s an idiot.

Our love is a true love! He would never try to eat my brains!

Unfortunately for all of us, Freddy is not successful.

Eventually, Ernie and Tina are holed up in the air ducts of the funeral home with Zombie Freddy trying to bust through the roof. Ernie looks to be a few seconds from shooting Tina in the head. (As a mercy killing, understand, not merely because she’s annoying.)

Burt, Spider, Chuck, and Casey, meanwhile, are trapped in the medical supply warehouse. Burt finally decides to call the army. (There’s a number on the drums to call in case of an emergency, but Burt doesn’t call it earlier because he doesn’t want to lose his business, presumably.) The call goes to Colonel Glover, who has been waiting the whole movie for news of these drums. If Burt had called before they cremated the first zombie, well, things might have turned up okay. However, by this point, the whole town has been completely overrun.

The government reassures Burt that they have a “contingency plan.” Casey thinks that’s spectacular. Spider, God bless him, is suspicious as hell, and is all like, “What is this plan?”

And that’s about the time the government nukes the town. Which, of course, only leads to more Zombie Ashes and Zombie Rain, right in time for the President to visit in the morning. And . . . fin!

It must be said: it’s a pretty awesome comedy that manages to kill every main character at the end of the movie and still be funny.

This is pretty silly and fun, and I’m glad I watched it for Zombie Film History, if nothing else. But I didn’t love it, either, the way most zombie fanatics do, and I don’t know if that’s a nostalgia thing or a flawed film thing or what. The movie could grow on me. Some of my favorite movies do. But when the first zombie comedy you ever watched was Shaun of the Dead, you’re starting the bar pretty high, I think. I guess my conclusion is I have no true conclusions at this point. Sorry.

Um. Don’t keep creepy looking Army drums that don’t belong to you? Dump them somewhere and inform the Army of their location from some nice, anonymous pay phone far, far away.