So, I’m a nerd. You may not have realized this, if you’ve never read this blog before or if you’re particularly dense, but my nerdiness is something that cannot be denied, nor would I wish to. And, as a nerd, one of the things I did this year was make my first pilgrimage to Dragon Con.

For those of you who don’t know, Dragon Con is a fairly massive geek convention that’s held annually in Atlanta, Georgia. It’s hosted in five different downtown hotels, and there are about a bazillion panels on pretty much every geeky thing that you can possibly imagine, like “Click, Bang, Boom: Weapons of the Apocalypse” to “Masculinity in Star Wars” to “Gentlemen and Ladies Self Defense with a Cane”.

My sister and I attended Dragon Con in part to see such panels, but mostly to meet a lot of our online Trekkie friends face to face.

Warnings for general geekery, pageantry, and a ridiculous amount of photos.

So several years ago, I started writing on an email-based Star Trek RPG. Non nerds: an RPG is a role playing game where people play characters of their own design and interact with other players. In an email-based game like ours, you write JPs (or joint posts) with other writers, coming up with stories that contribute to the overarching mission that the GM (general/group manager) has decided upon. On Friday, the first day of the con, I kind-of, sort-of dressed up as my character, Lt. T’Pol (8-ball) Hunter, a fairly crazy, oversexed, half-human, half-Vulcan science officer. 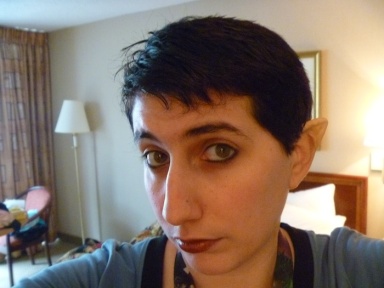 Some people make their costumes or have their costumes made by awesome, awesome people. Kat, for instance, makes these really just fantastic costumes. (You will see both Kat and her awesome costuming skills later.) One of the best things about going to conventions like this one is just looking around at all the other attendees. I didn’t really take pictures of anyone that I didn’t already know (it’s totally normal to do so, but I always feel strange doing it), but there are a ton of great images here and here.

I, however, sacrificed authenticity for relative cheapness and, also, less fabric. This was my first visit to Atlanta, and I have since discovered that their ridiculous humidity is not to be borne. (I kid. I could probably eventually become accustomed to their awful, wet, suffocating air, but I much prefer the dry heat of California.) Anyway, for a slightly better look at my costume . . .

Because this is how half-Vulcans who hate their Vulcan heritage stand. Also, that’s Robyn in the background. Robyn was very patient with me when she taught me about prosthetics and spirit gum.

Besides my Trek friends, I also got the chance to reunite with my friend James from Clarion West. Our matching tattoos are totally nifty and also not real. They are the product of another CW friend and alumni, Huw.

Now, I don’t write for the Trek sim anymore on a regular basis (either of them, actually, because there are two: the USS: Galaxy and the USS: Miranda) but I still keep in contact with a lot of the writers because I became friends with many of them. Still, meeting face to face for the first time is always a little worrisome — less because you think they’re going to slice you up into little bits and more because you’re hoping that your online relationships will translate to the real world. Thankfully, everyone seemed to get along really well, and we honestly spent a lot of our time ignoring panels we had planned to go to in order to just eat food and talk.

We still managed to go to some events, though. For instance:

The Buffy and Angel Q&A was probably one of my favorites. James Marsters (Spike), Juliet Landau (Drusilla), and J. August Richards (Gunn) were there, and they were a lot of fun to listen to, particularly Marsters, who came off as very outgoing and opinionated but also not as an asshole.

Slightly less entertaining was 101 Fascinating Ways to Kill a Character, mostly because there was not actually a list of 101 fascinating ways to kill a character. Mostly the panel was about why you kill a character, which was interesting up to a point, but I wanted more talk about methods, not motivation. I wanted it to be exactly what it said on the tin. Plus gore. I wanted GORE!

Of course, nothing, nothing, was as disappointing as Klingon Karaoke.

Klingons do NOT sing.

I was fascinated by the whole idea of Klingon karaoke. I wasn’t sure if it would be Klingons singing pop songs, people singing traditional Klingon songs, people translating pop songs into Klingon . . . any of these would have been fine. (Although, I’ll admit, I was really pulling for people in full Klingon garb singing things like, “I’m Sexy and I Know It” or “Like a Virgin.”) What actually happened?

Seriously, no one sung in Klingon. No one was dressed as a Klingon. Barely anyone was dressed as anything from Trek. There was a dude super earnestly singing, “God Help the Outcasts,” and man. It was baaaad. And for Christ’s sake, THERE WASN’T EVEN ALCOHOL TO DEAL WITH ANY OF THIS. The whole thing was just so, so sad. We left fairly immediately.

Other Dragon Con events: the Warehouse 13 panel and the Miss Star Trek Universe 2012 Pageant. I enjoyed the Warehouse 13 panel despite the shitty microphones. Saul Rubenstein (Artie), Eddie McClintock (Pete), and Aaron Ashmore (Steve) were there, and it was pretty funny how much they all seemed exactly like their characters. And while I’ve read a good deal of shit about this show, I really like Warehouse 13 for exactly what the actors themselves praised about it: the awesome tone. A lot of shows try, but Warehouse 13 really does go from dark to goofy pretty seamlessly, and I enjoy the hell out of it. So fuck off, haters.

However, clearly the very best Dragon Con event was the beauty pageant. We had to go because our friend Robyn was in it. (While I was on the sim, Robyn was my main writing partner. Our characters had a long involved storyline, including that time when her character stabbed mine to death in an alternate future timeline. Bitch.) Robyn actually went as her character, T’Pei.

All the beauty pageant pictures are unfortunately a bit blurry. The lighting in there was HORRIBLE. 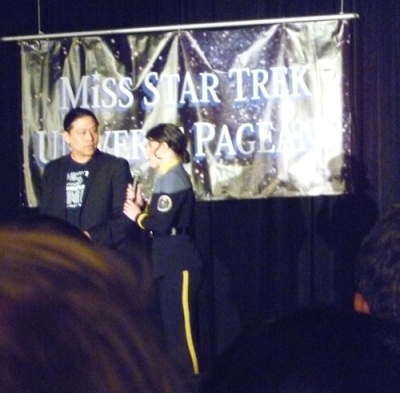 That’s Robyn talking to Garrett Wang (or Ensign Harry Kim from Star Trek Voyager). He was the host of the pageant.

Garrett Wang was an absolutely awesome host, by the way. He’s clearly actually a nerd, which is always kind of enjoyable for fans, and he seems to have a great sense of humor. Also a ponytail now. I approve of the ponytail.

Some of the other contestants in the pageant . . .

Clearly, I was voting for Robyn the whole time, although I’ll admit to being impressed with how much the Deanna Troi contestant actually looked like Marina Sirtis. 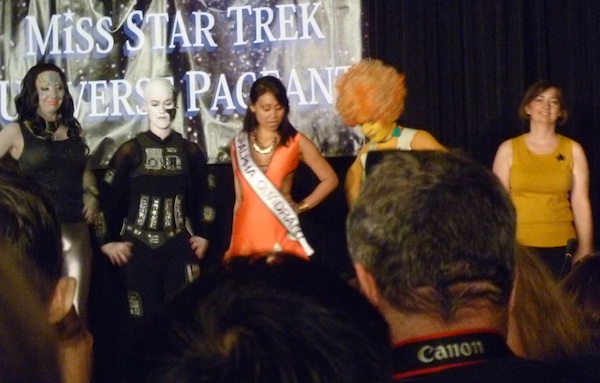 I also really liked the Borg’s costume a lot. And while Kim Cardassian was an easy joke, I thought the girl was actually pretty funny.

Now, Robyn spent a lot of the weekend being nervous about this pageant because she didn’t expect it to be nearly as big of a thing as it actually was. About 2,500 people watch this show every year — she was thinking more like thirty. There was a lot of, “I’m never going to win this,” nonsense coming from her.

She also got to meet Nichelle Nichols (Uhura from TOS), who was a judge. This was just spectacular.

We were all so proud. That sounds sarcastic and jokey, but actually, it’s pretty sincere. I couldn’t wait to give her a gigantic hug. She was awesome on stage. It’s hard to be funny and stay in character as a Vulcan — I know because I deliberately didn’t write for a Vulcan, not a real one — but Robyn did so well. Also, the bitch can sing, like, amazingly well. Can you believe that? I despair of my talented friends.

Oh, and speaking of talent, this is Kat who I mentioned before: 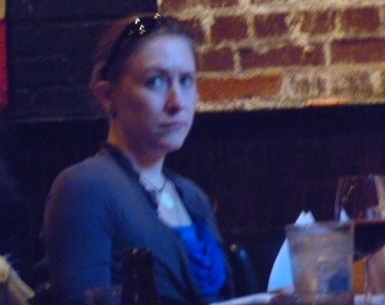 Okay, clearly with all these blurry shots, I’m not meant to be a photographer. Hell with it. I’m still blaming the lighting. 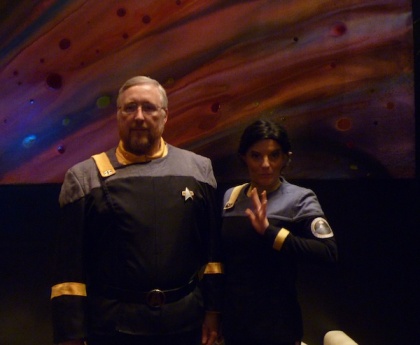 And I’m also pretty sure she did Robyn’s Rydia costume.

Mind you, not every costume has to be intricate to be awesome. This is Brandon as Jamie Hyneman from Mythbusters. 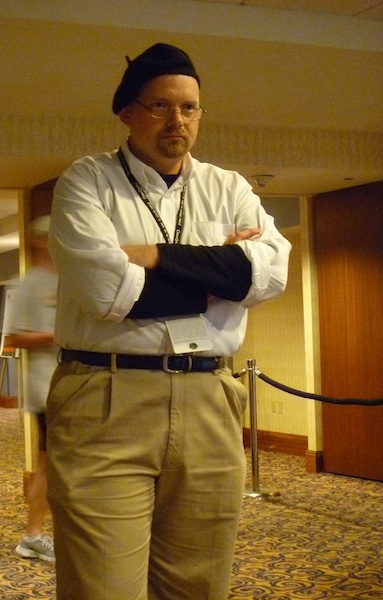 It was sort of perfect.

And then those pesky hipster X-Men again . . .

Finally, me in my Cowboy Bebop costume, which was almost entirely purchased at Target. 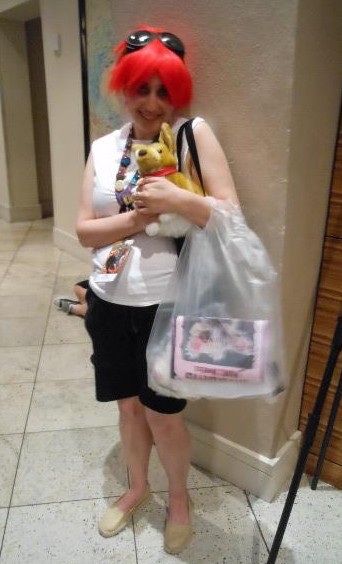 There is also much shopping to be done at Dragon Con. There are two exhibition halls plus the Art Show and the Dealer’s Room. I tried not to go too crazy with the spending, but I had to buy a few things. For instance, the Abominable Snowbaby was far too cute not to buy.

The St. George’s like to cuddle with their stuffed animals, clearly.

And then I always need more geeky things to add to my walls:

This is how I learned the alphabet.

And . . . well, I guess that’s about it. I had a great time, and while I don’t know if I can afford to go next year (I’m tentatively planning an excursion to England — England! — like leaving THE COUNTRY!) I would love to go again if it’s possible, maybe make it to more panels or events this time. (I’ve always wanted to go to a really good Zombie Prom or at least participate in a Zombie Walk. The walk they have there is fairly gigantic. One of the best zombies I saw was probably about seven years old.)

If any nerd is looking for a good time next Labor Day, Dragon Con in Atlanta is the place to be.