It’s February, people. The month of luv. But for those of you who are bored of luv — and who can blame you, if you are — we at My Geek Blasphemy have something better to offer you instead: murder, mayhem, and possibly a just a teensie touch of mockery. 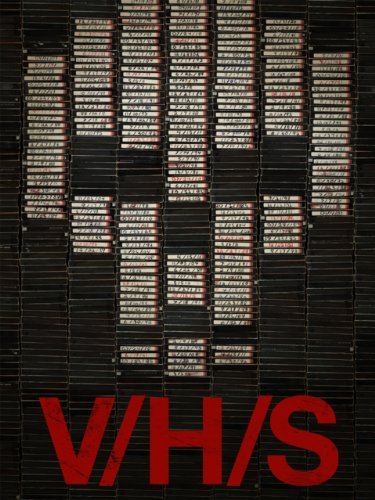 Celebrate Valentine’s Day a little early with me, people. This . . . is Bloody Hearts.

A group of winners — that is to say, about four or five professional assholes — break into an old man’s house to steal a video tape. Unfortunately, there are lots and lots of video tapes, and they don’t know which one they’ve been hired to nab. So, naturally, the guys begin watching them all. But weird damn things have been filmed on these tapes, and weird damn things start happening in the house, too.

1. First off, things to know: V/H/S is an anthology film where five different stories (Amateur Night, Second Honeymoon, Tuesday the 17th, The Sick Thing That Happened to Emily When She Was Younger, and 10/31/98) are contained within one overarching, narrative story (Tape 56). Twelve different writers and ten different directors are credited on IMDb. (The only directors I recognize offhand are Ti West {The House of the Devil} and Glenn McQuaid {I Sell the Dead}. It’s a fairly ambitious project, and I’ve read some great reviews about it.

This is not going to be one them.

Conceptually-speaking, there are some awesome ideas behind V/H/S. I’ve struggled with some of the anthology films I’ve seen because I always want them to have some kind of great narrative story, tying them all together, and they rarely do. (Or maybe I’m just thinking of Paris, je t’aime. Anyway, I tend to have framing problems.) But the idea of a bunch of guys breaking into a house and watching these weird, twisted stories is kind of awesome. Unfortunately, I like the idea a lot more than I like the execution.

2. So, what’s wrong with the execution, you might ask? Well, quite a bit, actually. Let’s start with the characters. 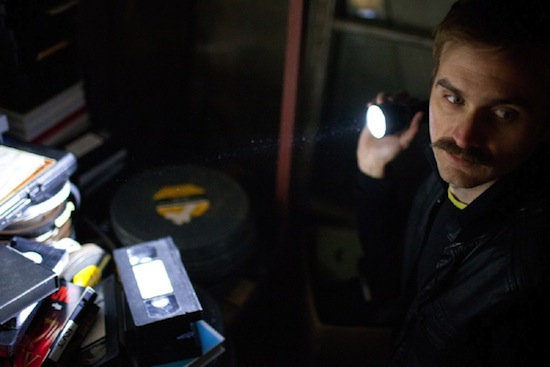 Only one of many, many truly awful people.

It is a well-known fact that most horror movies are populated with unlikable characters, from bitchy shrews to misogynistic assclowns . . . horror movies love an unsympathetic character because then everybody gets to enjoy his karmic and bloody demise. And if you just want to kick back and watch a dumb horror movie, where stupid kids act stupidly in the woods and die stupid deaths for their stupid actions . . . I mean, have at it. I like those kinds of movies myself sometimes. I get it, I do.

But that being said, it is a pretty tired convention and, frankly, a little lazy. Smart horror, excellent horror, comes from the destruction or the attempted destruction of the safe and the good — it’s turning likable people into monsters. It’s relatable people trying to survive in the collapse of normality. Well-crafted horror is inclusive. The audience ought to be brought into the tension, not sit back from it.

Which doesn’t mean you can’t have an asshole or two in your story. Assholes are fine. There are plenty of assholes in the world, and it’s not a stretch that some of them might appear in your film as well. It’s just that you don’t need, like, twelve assholes. Because when your film is almost entirely about seriously unlikable people doing seriously unlikable things, well, no one wants to watch that.

3. There’s also the unavoidable fact that all of the stories are problematic in some way. “Amateur Night” has the creepiest villain and some cool visuals, but it takes way too long to get there. “Second Honeymoon” ends in a twist that the story just doesn’t properly support. There’s an interesting turn in “Tuesday the 17th,” but I can’t get past the fact that this one character’s plan makes no sense whatsoever and, also, the acting of said character is not the best. (Also, Psych‘s episode, “Tuesday the 17th,” is actually a much better homage to Friday the 13th, despite it being a silly parody.) There’s an interesting turn in “The Sick Thing That Happened to Emily When She Was Younger” as well, but it leaves a lot of unanswered questions and, also, our heroine is ridiculously stupid. “10/31/98” might be the best story overall — at the very least, the characters aren’t all gross, molesting wastes of human beings, although they still have serious judgement lapses — but it’s a weird conclusion to leave the film on.

And the narrative story itself, “Tape 56,” is probably the most problematic because — other than focusing on the very worst of the misogynistic assclowns for what feels like years — it also isn’t really much of a story, just a set up that never, ultimately, pays off.

All in all, my friends and I quickly came to the conclusion that we were almost always rooting for the bad guy to win.

4. On the positive side, a lot of the individual shots are really very good. 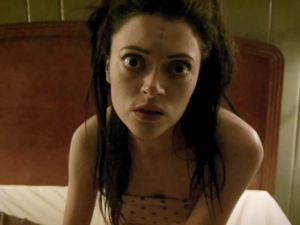 And the words “I like you” have never been so creepy.

On an aesthetic level alone, V/H/S is mostly a success . . . with one caveat that I’ll address in the next note. But visually, the stories are often very atmospheric and creepy, and the talent of the individual directing isn’t really in question. It’s the individual writing that needs serious work, that, and how the film works as a whole by the very end. Because like I said before, I found the conclusion definitely problematic.

5. My one problem with the visuals is the shaky cam.

V/H/S is a found footage film, which makes sense for the anthology — even if I’ve been tired of seeing found footage horror for, oh I don’t know, three years now. (Let’s take some inspiration from Chronicle, people! Apply found footage to other genres! Make it relevant again, or just get rid of it!) And it didn’t make me sick to my stomach because unless I have a sinus headache, you can’t make me sick to my stomach — I could sit in a room with strobe lights for 24 hours with no problem at all. (On the other hand, if I do have a sinus headache, the slightest shifts will bother me. If it’s a bad one, I don’t want to do much of anything, much less watch television.)

But the shaky cam is often just a little ridiculous here — it’s like none of these people have ever held a video camera before in their life. And you know what — I’ve barely ever held a video camera in my life, and I could still hold the damn thing steadier than these characters manage to. The constant shakiness and bad framing and everything else just feel far too self-conscious. Found footage is supposed to feel natural, like real moments caught on camera, but the filming here often makes the whole thing feel contrived and artificial.

6. I watched this movie because I’d read some glowing reviews for it, but I’ve since read some of the criticisms as well, and one keeps popping up almost everywhere I look: it makes no sense for some of these stories to somehow be recorded on VHS. 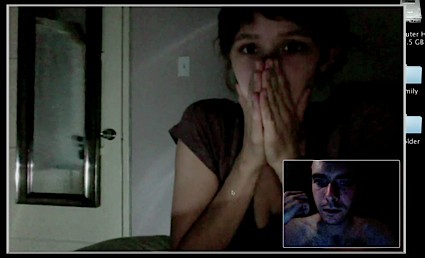 For instance, a Skype chat.

And if I thought V/H/S was fantastic in every other respect, I’d probably overlook it, but . . . again, this is lazy. The multiple tapes set-up is a good one — I don’t think I’m asking too much to want the writers to commit to their premise. Particularly if you name the movie V/H/S . . . the stories really ought to be ones that could actually be on a VHS.

Conceptually, it’s neat. There’s definite talent here. Some great visuals. But the movie doesn’t come together at the end like I need it to, and the writing is kind of weak sauce. Come up with some fully drawn characters and try again, please.

Hannah Fierman or Daniel Kaufman (from “Amateur Night” and “The Sick Thing That Happened to Emily When She Was Younger,” respectively)

Don’t be a misogynistic assclown. And don’t break into some dude’s creepy house and try to steal his shit. I mean, seriously.