Enough procrastinating. It’s time to get back to the list. 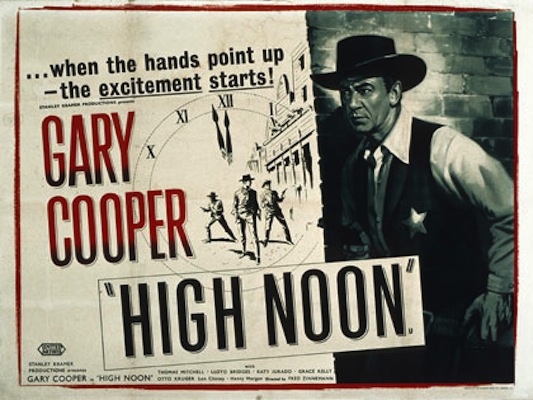 This is the oldest western on my list, and I think my favorite to date. (Okay, I’ve watched three movies thus far. Still. It’s is a good one.)

Marshall Will Kane puts his extremely new marriage and retirement on hold in order to stop Frank Miller and his gang from returning to town and wreaking havoc. But when Kane asks the townspeople for help, they abandon him.

1. Despite the fact that it’s not a quote from the actual movie itself, I almost titled this post, “That was Gary Cooper, asshole.” Two life points to the first person who can tell me what movie that’s from.

2. Also, this is my first Gary Cooper film, and I was initially startled by his resemblance to Jimmy Stewart. (Cooper’s on the left, by the way, in case you don’t watch a lot of old movies or aren’t particularly good with faces.) 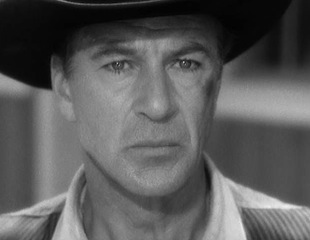 Mek insists there’s a little Robert Redford around the eyes, too, which I can kind of see. More importantly, Gary Cooper’s pretty awesome in this and, as such, won Best Actor over Marlon Brando, Kirk Douglas, José Ferrer, and Alec Guiness in 1952. I like Cooper’s performance — on paper, running around for half a movie asking for help doesn’t sound all that compelling, but in reality, watching Kane’s initial resolve shift and occasionally falter from the multiple betrayals by his friends, coworkers, and the people he’s sworn to protect . . . it’s interesting.

3. I suppose it’s especially interesting because many people consider High Noon to be an allegory for McCarthyism and blacklisting. I tend to be careful about ascribing a certain political motive to any story without hearing it straight from the horse’s mouth — difficult, now, considering that most people involved are certainly dead — but I will say that I can easily see how High Noon COULD be an allegory for such a thing. I would also point out that not only was the screenwriter, Carl Foreman, blacklisted himself very shortly after writing this film, but even at the time it came out, High Noon was considered a political allegory against McCarthyism. Apparently, one of its biggest opponents?

Until yesterday I was unaware of this — look, my film history knowledge is there, but it’s sketchy in some places — but I guess John Wayne was a pretty huge supporter of blacklisting, which makes me think considerably less of John Wayne. He didn’t think High Noon made for a good western, called it “un-American,” and reportedly teamed up with Howard Hawks to make Rio Bravo as a response.

I’ve never seen Rio Bravo, and I’m both more AND less interested in watching it now. It’s not on my list, though, so you almost certainly won’t see a review for it this year, which is probably for the best. I like that I can usually separate an actor’s personal, political, or religious beliefs from his work as an artist — although some might not actually consider that much of a virtue — but I suspect I’d have difficulty doing that right now with John Wayne. In related news, I think I’ll put off watching The Searchers until the end of 2013, while I’m at it.

4. But back to the movie itself: Helen Ramirez is pretty much the awesomest.

Helen (Katy Jurado) is Kane’s ex. She’s also the bad guy’s ex, and she’s currently shacked up with Deputy Marshall Harvey Pell (Lloyd Bridges), which proves that she doesn’t have great taste when it comes to lovers because, seriously, Pell is a spoiled dipshit. Then again, watching her verbally bitchslap the deputy around is pretty awesome. Helen is confident and independent and sensual and strong, and I enjoy the hell out of her.

5. Next to her, Grace Kelly doesn’t really stand a chance.

Actually, Amy Kane (Kelly) gets better for me as the film progresses, but in the beginning . . .  good God, she’s annoying. I swear, there’s a way to object to violence without being such a whiny princess about it. (Although maybe you can’t help but be be a whiny princess when you’re wearing that bonnet. You know I don’t have a bonnet in my hat collection? I should work on that.)

6. I like that there are multiple motivations for people turning against Kane. Mostly, it’s cowardice, but some people (like Amy) are against violence of any kind, while other people are actually friends of our bad boy, Frank, and some are simply nursing a grudge against Kane himself. I also like that there’s a discussion of these motivations and justifications and excuses among the townspeople, particularly in the church scene. It’s helpful to see that Kane has some supporters, even if they ultimately turn away from him.

7. But seriously — Harvey Pell? Such an asshole.

Dude, I get you’re sore about not being the big cheese and all, but if you can’t see how refusing to do your job unless you get something out of it makes you a terrible candidate for town marshall . . . well, you’re just worthless.

8. It’s funny to see Lloyd Bridges so young, but you know who I get an even bigger kick out of? Harry Morgan.

I used to watch a ton of M*A*S*H reruns while I was in high school, so it’s weird to go back and see Colonel Sherman Potter as such a young dude. And with a little mustache, no less.

9. My biggest complaint about this movie is our bad guy, Frank Miller. (And not like it’s an uncommon name by any means, but my inner geek is highly amused that our bad guy’s name is Frank Miller.) In the film, Frank is described as wild and kind of crazy. He may even be called psychotic. Everyone seems to be absolutely terrified of him — women couldn’t walk the streets without fear of being attacked, and anarchy just seems to follow him wherever he goes. It’s clear he’s put this town through the wringer before, so when we finally get to see him, I was expecting something, I don’t know, more.

But Frank Miller is just this dude who hops off a train with a gun in hand, and he’s not particularly menacing or intimidating or anything. And, admittedly, there’s an argument to be made for subverting audience expectations with a weak sauce villain — like how you expect Chaney to be a very different type of bad guy while watching True Grit. (The remake, at least. I haven’t seen the original, so I can’t compare.) But Chaney seems to be a clever and very deliberate attempt to throw the audience, whereas here . . . I don’t know; it almost seems lazy, like they couldn’t bother to find an actor who could give Miller some presence, like any old black hat would do. But for a character we’ve been talking about the whole damn movie . . . no, I wanted a little more bang for my buck here.

10. The music in this film definitely stands out, asking to be noticed but not so much that I minded it. “The Ballad of High Noon” (or “Do Not Forsake Me, Oh My Darlin’ “) is the movie’s theme song and won Best Original Song at the Academy Awards. It’s also sung by Tex Ritter, John Ritter’s father.

11. For more High Noon related musical trivia: one of the henchmen, Ben Miller, is played by a guy named Sheb Wooley. You might know him as that guy who sings, “The Purple People Eater.”

12. Finally, before my extremely brief Spoiler Section, High Noon isn’t exactly shot in real time, but it’s pretty close, and for my money, kind of awesome. The “real time” gimmick can sometimes feel just like that . . . a gimmick . . . but I think it works really well here, both to build tension and to keep this story trim.

I only created a spoiler section because I’m a very silly person.

Kane goes to face Frank Miller and his three lackeys alone, and watching them chase him through town is pretty cool. When done well, the talk talk talk ACTION model of shooting a movie can be very effective. Kane gets two of them, I believe, before getting wounded. Meanwhile, Amy boards the train with Helen, but when she hears gunshots, she can’t leave her man behind, and damn her principles. Because I like Helen more, I was kind of hoping she would be the one to change her mind . . . but I’ll admit, it makes much more story-sense for Amy to do so.

Amy shoots the third lackey in the back. Frank gets ahold of her, but Amy fights him off and leaves him an open target. Kane shoots Frank dead. This is my second, more minor quibble with the film: I’m just not crazy about how this last bit of staging is done. It’s a little too easy, too abrupt. But whatever, Frank’s a goner. The town comes out to look, and Kane disgustedly throws his marshall star to the dirt. Then he and Amy take off, and that’s the end.

For my money, that’s both a pretty awesome end and the best way I’ve seen someone silently say, “Fuck all y’all,” in a while.

Smart, enjoyable western. Whether it was intended as an allegory or not, I really liked it.

Don’t let cowardice prevent you from doing what you know is right.

Also, you want something done? Well, sometimes, you just have to go out there and do it yourself because, ultimately, people suck.

3 thoughts on ““In The End, You Wind Up Dying All Alone On Some Dirty Street. And For What? For Nothing. For A Tin Star.””