When it comes to television, I am Queen of the Gone-Too-Soon. 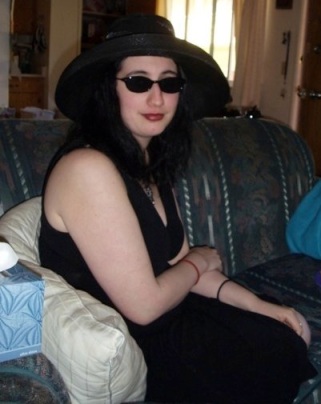 This is my mourning attire.

I have fallen in love with all kinds of television shows that have been cancelled well before their time. Some shows — like Farscape — I’ve made my peace with, because while Farscape may have been my favorite science-fiction show ever, it did at least get a full four seasons, plus a mini-series to make up for the horrifying cliffhanger they ended the series on. (Seriously, that is not how you end a show. That is just cruel and sick and twisted, three things I often approve of . . . just not in this case.)

There are shows, however, that I still mourn to this day, which brings us to my very first entry in this semi-regular feature: The Unusuals. 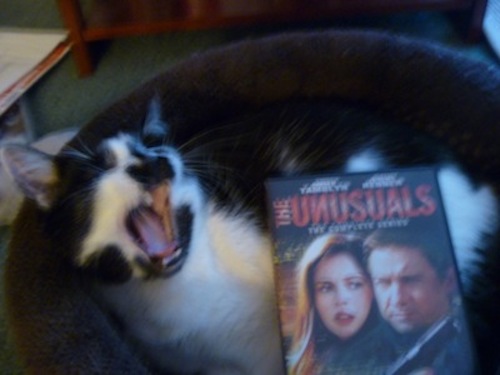 The Unusuals was a quirky crime procedural back in 2009 that lasted a whole ten episodes before getting yanked off the air. It starred Jeremy Renner, Amber Tamblyn, Harold Perrineau, Adam Goldberg, Monique Gabriela Curnen, and Terry Kinney, and it was an awesome show that really balanced the kooky and the serious in the best of ways.

Considering how long it was on the air, well, there’s a good chance you missed it. The good news: if you’re interested in checking it out, the show is now on DVD, as evidenced in the above photo with my cat. The bad news: if you saw this DVD in the store, you’d have no idea what kind of show you were getting yourself into. They try to sell this series as a “dark and gritty” cop show. Which . . . look, it’s not that there aren’t serious moments. There are, some really good ones, even. Like, here:

(Admittedly, the sound being a little off takes away some of the seriousness. But I couldn’t find another clip.)

Still, most “dark and gritty” cop shows I can think of probably don’t have a lot of quotes like this:

Dispatch: “Be on the lookout for a ninja, or a ninja-like figure.”

Beaumont: “Here’s what you need to know about the Second: Alvarez talks about himself in the third person, Banks sleeps in a bulletproof vest, and yesterday Delahoy named his mustache.”

Walsh: “Did you know it was illegal to give a monkey a cigarette in New Jersey?”

Casey: “Is that Bobby Vandercamp? Oh, man. We used to call him Captain Date Rape in high school. I bet he’s got coke on him.”

Medical Examiner: “Do you know how hard it is to get clown makeup off a bone saw?”

Dispatch: “Second Squad, this is Dispatch. Be on the lookout for a man in a hotdog costume, last seen running west on Hauser Street. Suspect may, or may not, be wielding a samurai sword.”

This was a pretty great show, people. Very short but pretty great. And while it unfortunately ended with a number of things unresolved, I still think it’s worth checking out.

Better to have loved and lost and all that.

2 thoughts on “QotGTS: The Unusuals”