It’s been a while since I’ve done a Quote Challenge, so I thought I’d come up with a new one for you today. This time, however, we’re mixing it up a little and taking quotes from television shows instead of movies.

Here’s how it’ll go: I’ll give you three quotes from twelve different television shows, and you get to guess what each show is. (It was too hard to only pick one quote per series, especially if said series lasted over five seasons.) If you happen to see the name BOB in any given line of dialogue, do not automatically assume that the quote is from Twin Peaks. I’ve just decided to use BOB as a replacement for a character’s name, mostly because I thought it was funny as hell. 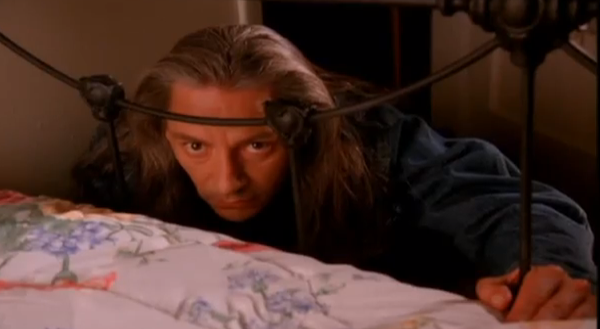 Fear BOB! He can be ANYWHERE!

1. “BOB is literally on fire today.”
“What kind of fire are we talking about? Michael Jackson in the Pepsi commercial fire or misusing the word ‘literally’ fire?”

“This car makes me want to weep and then die.”

“If I’m not back in exactly four minutes, please come looking for me. But really start giving it some serious thought after two. And if you think that there is anything even slightly amiss after forty-five seconds, you’re the leader here.”

2. “I was raised to believe that men dig up the corpses and women have the babies.”

“I think I’ve figured out how to steer by gesturing emphatically.”

“The monkey is French?”
“All monkeys are French.”

“BOB, on your tombstone it’s gonna read ‘Post hoc ergo propter hoc.’
“Okay, but none of my visitors are going to be able to understand my tombstone.”

“I am making a mental list of those who are snickering, and even as I speak I am preparing appropriate retribution.”

“BOB, you’re looking grim. I’m afraid I don’t have a supplement for that.”

5. “I like your style, hombre, but this is no laughing matter. Assault on a police officer. Theft of police property. Illegal possession of a firearm. Five counts of attempted murder. That comes to . . . twenty-nine dollars and forty cents. Cash, check, or credit card?”

“Shut up! I hate when villains quote Shakespeare!”

6. “Let me just say we accept homeowners of any race, religion, color, or . . . sexual orientation.”

“I hope your apple pie is freaking worth it!”

7. “Rule number one: don’t bother sucking up. I already hate you. That’s not going to change.”

“Are you really as shallow and callous as you seem?”
“Oh, you want to go out later and hear about my secret pain?”

8. “I feel like I let BOB down.”
“No, he let himself down by coming in this morning wearing a sweater vest.”

9. “I figure people are entitled to their hobbies, and I’m entitled to find those people creepy.”

“That’s my bottle. I’m not going to let you drink it all just because your daddy didn’t hug you much when you were little.”

“I would like a young Gerard Depardieu to play me in the movie.”

10. “I mean, why consummate two years of unbridled passion when we can have pasta?”

“Well, it’s just that sometimes I wish I was more of a free spirit. It must be nice to be a happy-go-lucky sociopath. I kind of envy you.”

“You got an itch, go scratch. It ain’t got to be all complicated either. The male mind understands the difference between love and sex. BOB, come here.”
“Hello, ladies.”
“I want to get busy with you.”
“Outstanding.”
“But I want you to forget about it as soon as it’s over.”
“Yeah, no problem.”
“Don’t be following me around all moo-eyed and ‘baby, I love you’.”
“Yeah, whatever you say.”
“See? No complications.”

11. “When a bomb starts talking about itself in the third person, I get worried.”

“Use grandiose language. He likes to be called sire. And it helps if you say things like, ‘The clever fiendishness of your evil plan is brilliant!'”

“You’re a woman, BOB.”
“Is that an observation or a diagnosis?”

Leave your guesses in the comments section. I’ll probably post the answers next Monday.