Here’s what I watched this month. It should probably be obvious, but in case it’s not: SPOILERS abound. (PLEASE do not leave any Walking Dead comics spoilers in the comments, though. I’m really trying to avoid them.)

Oh, how I missed you, Scandal. You are just good juicy fun.

The season premiere picked up right where the finale left off, which was nice. It also retconned the one thing about the finale I absolutely hated, which was also nice. I think they’ve done a pretty decent job of setting up the season, and I’m actually excited about Olivia’s Dad (Joe Morton) being in the mix. Dude, he is EVIL. I can’t wait to see more. (Also, I really hope Olivia slaps the President when she realizes he’s the one who leaked her name to the press.)

I continue to love the moral ambiguity of all the characters in this show. If there was a flaw to this premiere, it’s probably that the side characters didn’t have very much screen time. That’s not actually much of a flaw because this episode clearly was meant to be Olivia-oriented. It’s just that Scandal has a great supporting cast, and I’d like to see a bit more of them. I am happy whenever Joshua Malina pops up on screen, and Harrison and Abby definitely need their own storylines this year.

“It’s not too late to pull back. Couldn’t we just kill another intern? A bad one. The worst one.”

This episode wasn’t exactly amazeballs or anything, but it wasn’t a bad start. I guess I was a little disappointed because I was hoping the ‘Diggle and Felicity retrieve Mopey Oliver from the Island’ storyline would have lasted longer than five seconds. But hey, I was all for the Tarzan/Jane action — it’s nice to know the writers are clearly listening to the shippers. The “you’re really sweaty” line was pretty great.

I was pleasantly surprised to see Laurel acting all mature and reasonable with Oliver — I totally expected a bunch of annoying I can’t look at you anymore nonsense for half a season. That being said, I don’t at all understand her reasoning behind gunning for the vigilante. She says this about Dead Tommy: “He was killed in the crossfire between two archers. And now that Malcolm’s dead, there’s only one archer left and I’m going to help my boss catch him.” Which . . . doesn’t even make sense. Does she really think the Dark Archer wouldn’t have leveled the Glades if our hero hadn’t been around? Why would she possibly think that? Is she just trying to blame the vigilante for her own guilt or something? (I’m not saying Laurel is responsible for Tommy’s death, just that she likely would feel guilty. He did die saving her life and all.)

I’ll have to wait and see how Summer Glau’s character turns out. Right now, I’m not particularly interested in her, but that could possibly change with time. I’m a little more excited about Black Canary and some of the other DC characters I know are headed our way. Also, Walter’s back! YAY! I don’t know if he’ll continue to pop up or not, but I was glad he at least showed up once. I really like Colin Salmon.

And hey, a perfect pun transition — the salmon ladder survived Felicity’s remodel of the Arrow Cave. This is truly excellent news.

“What I lack in height, I make up for in wicked good hearing.”

On the plus side, the season premiere introduced a new mysterious plague, which is awesome. I mean, I felt a little bad for nerd kid Patrick and all, but this storyline’s kind of intriguing — presumably the animals are all diseased now, although diseased with what, I’m not exactly sure. I suppose it’s a natural thing, but I couldn’t help wonder if somehow the Governor had found a way to poison the wildlife as revenge against the prison crew. I guess that’s pretty unlikely, but I thought it’d be kind of neat. (You know, I have to psych myself up about the Governor somehow, since I’m still annoyed the bastard’s alive at all.)

Also, Carol’s teaching the kids how to stab things, which is pretty spectacular. Michonne actually smiles, and I shockingly don’t hate Beth. (Although if they were going to make it that obvious her BF would die on the supply run, I’m not sure why Kyle Gallner wasn’t just wearing a shirt that said Dead Meat.) Also Zombie Rain? I am always up for Zombie Rain.

Unfortunately, I found Rick’s whole storyline kind of . . . awkward. Like, I like the whole idea behind it, you know, can you come back from insanity and/or the horrible things you had to do to survive. Both Hershell and Crazy Irish Lady seemed to have different yet fairly valid answers for that, which is cool. But it was just so obvious that Crazy Irish Lady was crazy . . . I just didn’t care about her and couldn’t get into the idea that Rick was following her around the woods. It was such a clear setup for a Big Thematic Moment that I became annoyed by it. And for Christ’s sake, has Rick somehow gotten dumber? Look, I know he’s shaken up by his brush with insanity and his kid’s sociopathic tendencies and all, but he’s trying to wander around post-apocalyptic zombie world without a gun?! This is unacceptable.

So yeah. Some cool ideas, but I’m not totally sold on the execution. I’m not completely disheartened, though — it’s still twelve times better than the season finale. Oh, and while I could be wrong about this — like how long have I been expecting Hershell to finally die, right? — I think this might be the season where either Glenn or Maggie actually bites it.

“Your face is losing the war.”

Once Upon a Time in Wonderland 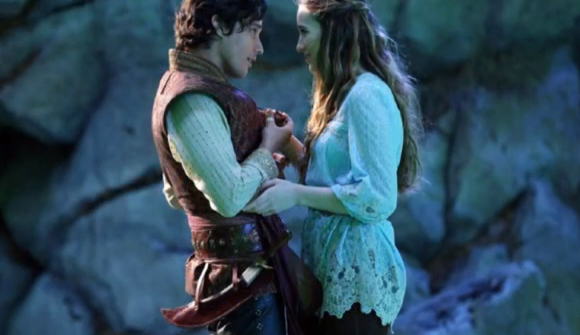 Despite the fact that I gave up on Once Upon a Time (twice, even), I felt like I should give the spin-off a try. Cause, you know. It’s Alice. And Wonderland. And insane asylums. And . . . genies? Okay, whatever. At least Dr. Frankenstein hasn’t shown up yet.

The series premiere is . . . uh . . . interesting. I think I might keep watching this for a little while because I did like parts of it, and I’m a sucker for fairy tales and such. Still, I have the feeling I’ll drop it before the season is out. (If it even makes it a whole season. I read the show did not-so-good in the ratings department.) I do have something of a soft spot for roguish characters with accents, so obviously I like the Knave. And Alice herself (Sophie Lowe) is pretty enjoyable. I like seeing her kick the shit out of orderlies. She does have a couple of hideously dumb moments, but I like the actress’s performance enough to look past them.

I can’t look past a few things, though:

A: When the hell time does this story take place? Did the Knave go back in time to rescue Alice from a new-fangled lobotomy in what is clearly a Victorian nuthouse, or is Alice from some magical patch of the English countryside where everyone behaves like it’s the 1800’s? Or is this version of Victorian England its own parallel world, separate from ours?

B. I can’t stand the Red Queen. Lana Parrilla, this lady is not.

C. The CGI is the worst. And I watch Warehouse 13, you guys. I regularly look past hideously awful CGI . . . but this shit, from the White Rabbit to the last shot of the . . . ah . . . Yellow Brick Road? It’s so terrible. And frankly, it’s not like ABC doesn’t have the money. I forgive Syfy for their budget issues, but Disney Central? Please.

D. Alice explains to her love, Cyrus, that her dad believes she’s crazy — you know, cause of all the stories of talking rabbits and eat me/drink me potions and whatnot — and she needs to bring proof of Wonderland back to him. Cyrus’s reaction: “So you’re risking your life for someone who doesn’t believe in you. You know, when you really love someone, you don’t need proof. You can feel it.”

Ugh. UGH. This is a terrible message. I feel rage rising inside me even as I think about it. (Or is that bile? Regardless.)

Thankfully, I just need to think of Naveen Andrew’s utterly ridiculous wig, and I’m back to smiling again. (There’s just so much hair!)