Exciting news today: my story, “Break the Face in the Jar by the Door,” will appear in The Unlikely Journal of Coulrophobia on April 1st. I promise, this isn’t just an early April Fool’s Day joke. The official announcement is here.

I’ve hoped to sell something to Unlikely Story for a while now. Unfortunately, Cryptography was right out (I know my strong suits, and writing about code breaking isn’t one of them) and I didn’t have any specific ideas suited for Entomology, but I figured I could try for one of the theme issues — I was particularly interested in The Unlikely Journal of Cartography. Alas, I couldn’t get the story together in time and missed out. When The Unlikely Journal of Coulrophobia was announced, I knew I had to do better.

I feel like I should be upfront with you: despite the theme, I wouldn’t necessarily describe this as a particularly scary story. Also, it’s in second person again because apparently that’s the only way I can write flash fiction. But I’m pretty happy with it, and way more excited for April Fool’s Day than I ever have been in the past.

Two months to go, people. In the meantime, I’ll leave you with this photo series: 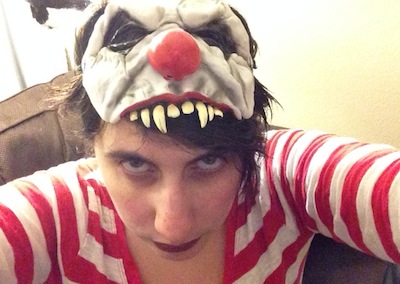 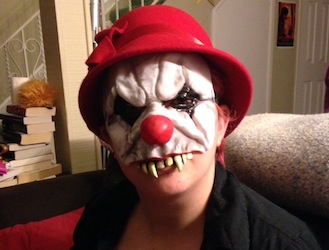 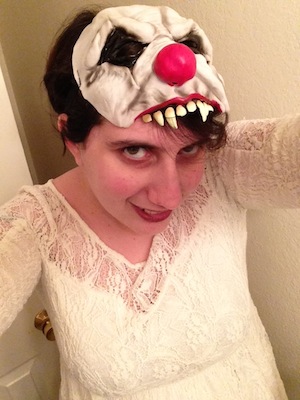 I don’t know when I became such a fan of taking silly themed pictures of myself, but, well. I had a creepy clown mask. I had to do something with it.

4 thoughts on “An Unlikely Story About Clowns”