Oh, I’ve missed you, show. Admittedly, I’m slightly annoyed with you for casting the excellent John Noble (everyone’s favorite dad for daddy issues) and then only giving him roughly twelve seconds of screen time at the very end of the episode — bastards– but other than that, this was a very solid premiere. (I know, I know, he’s sticking around. You’re still a bunch of damn teases, all of you.)

I will never get tired of watching Sherlock and Joan trying to take care of each other. They have one of my very favorite platonic relationships anywhere on TV, and Jonny Lee Miller and Lucy Liu work really well off one another. I also really liked Sherlock’s moment with Gregson, since I was expecting the latter to be all, “Grrr, argh, you did bad things!” instead of saying, “You’re acting like you did something; something was done to you.” It was a welcome surprise, and maybe, hopefully hinted that Elementary isn’t planning to just let Sherlock recover from what happened in an episode or two? (Elementary is usually pretty good about that sort of thing, actually, which is undoubtedly one of the reasons I enjoy it so much.)

The case itself isn’t anything deeply exciting — I guessed David Zayas was the bad guy just from seeing his name in the credits — but I didn’t mind so much, considering just how much emotional fallout the show had to deal with. And can I just say, that killer dude who shot himself in the head? He was super effectively creepy. I tried to look up the actor to give him kudos, but couldn’t seem to find him. Well, anyway. Kudos, Mystery Actor!

Not sure. “My compliments to the virgins whose blood you bathe in” was a pretty great line. Also, the scene were Joan threatens to punch Sherlock’s Dad’s Snotty Assistant in the face. That was pretty good for me.

I was so happy when The Librarians got renewed — it’s such a silly, fun, enjoyable show — but the two-part season premiere was really just okay for me. It wasn’t bad, exactly; it just felt a little off for some reason. Forced, maybe. Part of it, probably, has to do with Flynn, who I just don’t think fits in all that well with the rest of the team. And I was a big fan of Carter and ER in my day, but I can’t help but feel that Noah Wyle just doesn’t have quite the right amount of manic charm for the role. (I’m sure I’ve said this before, but watching him here mostly makes me yearn for Matt Smith, who could probably do this part blindfolded.)

Worse, the more time we spend with Flynn, the less time we spend with the characters I’d rather be watching, which is literally everyone else in the cast. I feel kind of bad about it, but I’m pretty happy Flynn’s not going to be in every episode because I think the team actually has a more interesting dynamic without him.

Lest it all be negative, I did still have some fun watching “And the Drowned Book” and “And the Broken Staff.” I enjoy the whole idea of the Fictionals and I look forward to their villainous shenanigans. (Although Prospero and Moriarty, while decent enough, kinda make me miss Matt Frewer as the Big Bad. Then again, I’m pretty partial to that guy.) I know Baird made me laugh a few times, although I can’t seem to remember any of her lines now. (I really should start taking notes for these things.) And I was definitely amused by the failed hug-it-out defense against Frankenstein’s monster. I love it when hugs fail because I’m a terrible person.

Yeah, probably Frankenstein’s monster. (Though I wouldn’t minded if he looked even slightly less silly.) Oh, or Ezekiel’s defense on why he doesn’t know how to use a card catalogue: “It’s the 21st century. I don’t know how to shoe a horse, either.” Word. 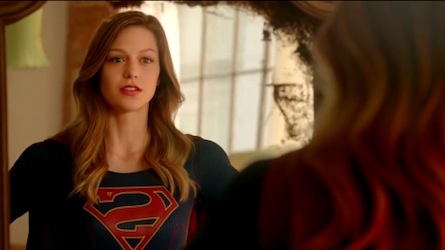 This show has been getting some serious love online — nerds, critics, presumably some regular people, too — but so far, I’ve gotta be honest: I’m kinda iffy on it. On the upside, I think Melissa Benoist herself has a ridiculous amount of charm, and I really enjoy watching her as Kara. Not everyone can fully rock that whole adorkable vibe, but so far she seems up to the challenge. I also didn’t call that her sister Alex — crap, it’s gonna be really hard not calling her Lexie — was a secret field agent, so that was a pleasant surprise. And Jimmy — crap, it’s gonna be really hard not calling him Eggs — is pleasant enough to look at/listen to. Also on the plus side: casting Dean Cain and Helen Slater as Supergirl’s adopted parents, not to mention pretty much everything about Calista Flockhart.

That all being said . . . look, I don’t mind showcasing more optimistic superhero stories; I really don’t, but guys, some of the dialogue here is painfully earnest. Obvious, too. I don’t want to be able to guess half the things the characters are about to say, especially if they’re going to say supremely stupid things like, “Why, because she’s a girl? That’s exactly what we were counting on!” Sweet Jesus, enough. You could make a drinking game off this pilot; take a shot whenever a character makes it obvious that this is a Female Superhero Show. And don’t get me wrong — I’m not asking for Supergirl to be a show where the superhero just happens to be female, like I’m totally fine with them acknowledging her gender and the bullshit she has to face because of it. But the lack of the subtlety in the dialogue just kills me dead. I want to feel empowered watching Supergirl, not pandered to. Mostly, however, I felt pandered to, and pissed off because of it.

Being fair, though, this is a pilot. There’s plenty of time for improvement in the script . . . but I know that if it doesn’t come in the first season, there’s no way I’m making it to the second. I will also need Friendzone to improve rapidly because I can’t possibly express just how bored I am by that whole tired setup. And while I know Hank Henshaw is supposed to be an ass, could he somehow be, like, less of an annoying ass? Because his dickishness is so one-note at this point that I just want to yawn whenever he opens his mouth.

Hm. Maybe Kara’s excitement when she saves the plane? It’s always nice seeing someone embrace the powers that you would kill for, rather than treating them like it’s some massive curse.