We’re closing in now: only two films left to discuss in this Mission: Impossible Mega Re-Watch! (Well, until 2021, anyway, which is when M:I – 7 is currently scheduled to release.) First up is Rogue Nation, a movie notable for many fine qualities, but none more important than its introduction of Ilsa Faust.

It’s been roughly four years since I first saw this movie, and–much like with Ghost Protocol–my feelings about it are largely unchanged, except that I like it even more than I did on first blush. Which isn’t to say that I don’t have one or two minor grievances: Luther and Brandt tracking down Ethan by concentrating their search on Ilsa, who they know Ethan implicitly trusts because of the way he sketched her, continues to be bullshit, like, this is just ridiculously, ludicrously dumb. The fact that Ethan and Benji survive this one car accident is equally ludicrous, although admittedly, it’s also pretty standard action movie fare. And it’s true that Solomon Lane (Sean Harris) is essentially just a gussied up Moriarty, but I’m mostly okay with it because his clear agenda and mildly creepy line deliveries still make him easily one of the best villains this franchise has ever had. Obviously, that’s not exactly a high bar to clear, but still, Lane works for me–at least in this particular movie.

Pretty much everything else I have to say is overwhelmingly positive: the action scenes–from the great fight sequences to the various heists and car chases–are all spectacular. I’m definitely a sucker for everything during the Sydney Opera House Mission. The humor continues to work well: Rogue Nation nails that comedy and team camaraderie from the very first scene and only builds on it throughout the film. I especially love the scene where Benji tells Ethan he won’t be left behind. In general, I continue to adore Benji, considering he essentially plays the damsel in distress here, right down to being menaced by some unnecessary, up-close villain leering.

Still, it’s really Ilsa Faust who makes this movie for me. She’s just such a great, complex heroine: badass, funny, has her own agenda. It certainly doesn’t hurt that she saves Ethan’s ass no less than three time in this movie. And I love that while there’s a certain amount of romantic/sexual tension between the two, Rogue Nation never wastes time getting them together or dropping the L bomb–not because I hate romance, but because you know it would’ve been rushed as hell and deeply unconvincing in this tightly plotted film. By delaying said romance until later installments, Rogue Nation actually provides a much better foundation for Ilsa and Ethan’s love story.

As great as Ilsa is, though, the best, most ridiculous line in this whole movie still goes to Alec Baldwin, who calls Ethan Hunt “the living manifestation of destiny,” a description I’m still very seriously considering putting on my business cards. People. It is sublime. There will never be a funnier, more perfect moment in this franchise than this.

Three movies left and just over two weeks to go. Let’s get into our next Disney Princess Movie: Tangled.

Not gonna lie, guys: this is one of my favorites.

END_OF_DOCUMENT_TOKEN_TO_BE_REPLACED

ETA: Trying to get back to business as usual, at least for the moment, though fair warning: there may be more political talk in the future. There may also not be; I don’t have any specific plans right now. But just so you know, the majority of this review, save some minor edits, was written before nearly half of America decided to vote for an unrepentant and unqualified bigot, so. Nothing here past this paragraph is election and/or protest related.

Okay. For a variety of reasons, my Disney Princess Movie Challenge had to be put on hold for several months, which leaves me with just under two months now to watch six movies and review them. This does not sound difficult until you understand that I am not a fast writer, and anytime I spend here writing for fun is, very unfortunately, time I’m not spending writing for money, and look people, I like money. I’m not even going to lie about that. Even if my rent hadn’t just doubled, which is sort of a consideration, I also like it when I have the opportunity to spend cash for things; I have, like, zero qualms about my materialism.

Regardless, I really would like to finish this particular challenge after failing so abysmally last year on Best Picture Winners, so I’m going to give it a shot. When we last left off, Mekaela and I had just watched Aladdin for the first time in about 20 years. Now? 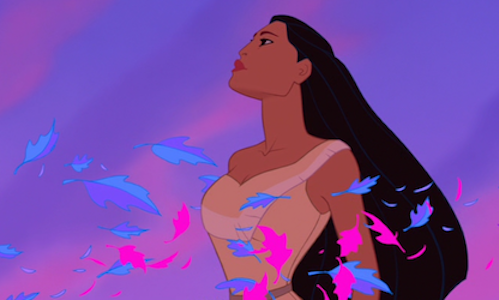 Now I watch Pocahontas for the very first time. God help me.

END_OF_DOCUMENT_TOKEN_TO_BE_REPLACED

Well. I finally started up my Great Star Wars Re-Watch again with Episode II – Attack of the Clones.

Man. This movie might actually be worse than I remembered, and I didn’t even like it the first go-round.

END_OF_DOCUMENT_TOKEN_TO_BE_REPLACED

I still haven’t quite gotten around to seeing the not-exactly-critically-beloved Batman v Superman: Dawn of Justice. (I’m not particularly jazzed about going, either, but I do want to check it out for myself. I like making up my own mind about shit, particularly if Batman’s going to be involved.) However, I knew I wanted to watch Man of Steel before I made my trip to the theater, so a few weeks ago I finally sat down and put it on.

Man. That long, dreary ass film did not help motivate my interest in Batman v Superman AT ALL.

END_OF_DOCUMENT_TOKEN_TO_BE_REPLACED

A side effect of falling hard for any particular fandom means that you will spend far too much of your time investigating any and all avenues of it. I fall in and out of love with fandoms the way most people fall in and out of love with, well, other people, and right now I am head over heels for anything to do with The Force Awakens. I even read a Star Wars novel, and I haven’t done that in probably 20 years.

Thus along with the Disney Princess Movie Challenge of 2016, I have also begun the great Star Wars Rewatch (that, presumably, everyone else did last year BEFORE The Force Awakens came out). That means I had to square my shoulders, face my fears, and watch a film I had not seen in a long time: Star Wars: Episode One – The Phantom Menace.

. . . yeah, it’s not great. There are definitely things I’m going to make fun of. Like, a lot of things. So many things. That being said, I’m not entirely convinced The Phantom Menace is quite the “involuntary twitching, brains leaking from ears, weeping blood, oh God, the horror, THE HORROR” experience people say it is, either.

END_OF_DOCUMENT_TOKEN_TO_BE_REPLACED

Friends, family, bored people who accidentally found their way onto this blog! The time has come for the 2016 Disney Princess Movie Challenge.

Let’s begin at the beginning, shall we?

Finding a copy of Snow White and the Seven Dwarfs proved to be slightly more challenging than normal, since it’s not available on Netflix or Amazon Prime and I was deeply unwilling to shell out too much money on a movie where the happy ending is dependent on a dude making out with a dead body. (Did you know that there’s a special platinum version of Snow White that’s currently selling on Amazon for $109.95? Admittedly, it appears that Disney included a ton of bonus features, but since I haven’t seen anything stating that the DVD is literally lined with gold, I’m not terribly convinced it’s worth the cost.)

Anyway, I did find a copy, thanks to the fact that my town still has a local video store. Thus we have much to discuss, like misogynistic dwarfs, creeper princes, and how Snow White leaves children with very unrealistic expectations about the helpful attitude of forest animals, among other things.

END_OF_DOCUMENT_TOKEN_TO_BE_REPLACED

Being October and all, I figured it was time to go back to the Friday the 13th series. When we last left off in A New Beginning, Tommy Jarvis had picked up Jason’s mask and looked about ready to stab the hell out of his final girl. Now?

Welcome to Jason Lives, everybody.

END_OF_DOCUMENT_TOKEN_TO_BE_REPLACED

About four years ago, my sister, my buddy, and I all went to the movie theater to see Mission: Impossible – Ghost Protocol. I had almost zero expectations at the time, having not been invested in the series since, oh, 1996, and surprised myself by really enjoying it. So, of course, we had to go see Mission: Impossible – Rogue Nation. (Although, according to some annoying blogger and his wife, Shirtless Tom Cruise is the only reason we REALLY went.)

I’m not sure if I liked it more than Ghost Protocol or not, but one way or the other, I had a pretty great time.

END_OF_DOCUMENT_TOKEN_TO_BE_REPLACED

Sleeping Beauty was never one of my favorite Disney movies. We didn’t own it, and I probably haven’t seen it since I was about six or seven. (I have vague memories of watching it at a friend’s house.) But since I’ve been working on fairy tale retellings all year, I thought I’d watch the movie again for inspiration/amusement.

I am now seriously considering re-watching all the Disney Princess movies for next year’s film challenge. Anything has to be better than Best Picture Winners. Why did I do this to myself, WHY? They’re all 800 years long.