The 2014-2015 Fall TV Season has begun. Sadly, many of the new shows I’m interested in won’t actually begin until after the new year (I haven’t forgotten about you, Galavant!), but I did get to see one pilot this week, along with a few returning favorites.

Here is my report card for the September premieres. SPOILERS ABOUND, PEOPLE. 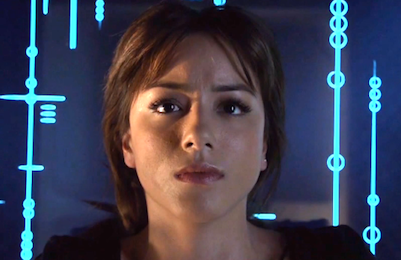 The second season premiere of SHIELD had at a lot going for it, I thought. Flashback Peggy, Dum Dum, and Fresno, for starters. (I’m sure this guy has an actual name, but I will always remember him as Fresno. I would be SO HAPPY if Fresno and Dum Dum ended up as regulars on Agent Carter.) Also Reed Diamond, who shockingly — shockingly — is playing a bad guy. And Clark Gregg facing off against Adrian Pasdar. (No, autocorrect, I do not mean Adrian Persuader. The hell?) And even Ward fulfilling the role of Skeevy Hannibal Lecter, complete with sexy Angst Beard! (Obviously a must have.)

Honestly, I thought this was a pretty good setup for the season. We’ve introduced some new bad guys and set up some new mysteries. I totally didn’t catch that Jemma was a hallucination, and that’s an awfully tricky stunt to pull. (I’m hopeful that they’ll also provide an explanation on why Jemma thought leaving would somehow help Fitz, since that seems like a spectacularly bad plan at this point. Poor Fitz. I sort of expect he’ll be magically fixed by the end of the season, but I kind of hope it isn’t quite that easy. I think it’d be fascinating to have a main character who has to actually live with his traumatic brain injury.) I’ll admit to being a bit bummed that Lucy Lawless died so fast, but I am always happy to see Lucy Lawless, even briefly. And I guess I have Attractive Accent Guy to take her place?

I know a lot of people are nervous about this sophomore season, but I thought this was a pretty good start and I have decently high hopes for what’s next to come.

Patton Oswalt mouthing, “What?” as Coulson badly pretends to be General Talbot over the phone 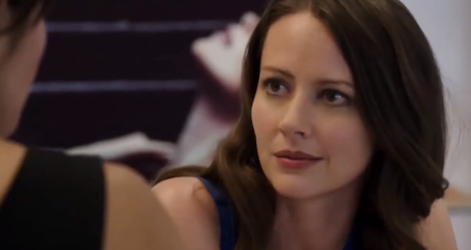 All right, time for the show to start, and it’s . . . hey, Frederick Weller! Man, I haven’t you seen you since In Plain Sight! I’ve missed you! Are you going to — oh, no, you’re about to die in three, two, one — yep, there you go. Oh well. Bye, Frederick Weller!

Of all my returning shows, I was probably looking forward to Person of Interest the most, and all in all, I think this was a pretty solid season premiere. I feel bad that Shaw has to sell makeup while John gets to be a cop (and the asshole even whines about it, that loser), but I assume a master plan will emerge from this eventually. I love that John ultimately takes Carter’s place as Fusco’s partner, and I’m ecstatic that he hired Elias to do his dirty work. Please, show, please keep bringing back Enrico Colantoni. I love him in this so much.

I’m really interested to see how this season plays out with Samaritan hunting them down. (Although if they keep being idiots and refusing to come up with codewords or code phrases for the phone, I can only assume they’ll die by November sweeps. Seriously, John and Shaw. No wonder Finch doesn’t want anything to do with you two.)

I’m not sure. Possibly Enrico Colantoni’s facial expression when John offers to hire him.

I don’t know if I have anything deep or insightful to say about this because I’m better at analyzing shows with ongoing plot and character arcs than I am at sketch shows, but I’m so happy Key & Peele is back on the air. And I’m kind of liking this new setup where the skits are connected by two guys on a road trip somewhere, instead of the usual standup clips. Mek and I were wondering if they were going to arrive somewhere at the end of the season, and if so, where? Personally, I think it should be Walley World.

Probably the aliens one, but the singing soldiers and liberal rednecks were up there too. 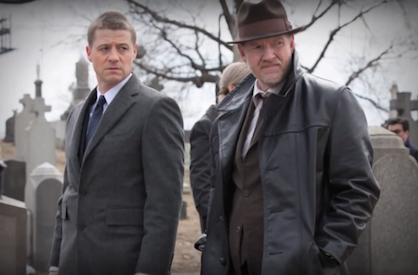 I’m only interested in two new shows this fall, and they’re both comic book shows. Overall, I thought Gotham was a fairly decent pilot with a good amount of potential but also some stuff that didn’t work for me. Like, dialogue. Good God. I read some early reviews calling Ben McKenzie flat, but I actually thought he did a pretty decent job with some of the lines he was given. That scene where he’s talking to recently orphaned Bruce Wayne about how there will be Light? No. That is shit dialogue. (Although I don’t know if anything made me groan as hard as that one Major Crimes guy telling Gordon and Bullock to “stay frosty.” Ugh. Guys, we have to retire “stay frosty.”) I’m also not entirely feeling Barbara Gordon at this point, although maybe her mysterious past with Renee Montoya will make her more interesting.

On the other hand, I’m interested in the setup. I think primarily focusing on the cops in Gotham is an interesting way of looking at the city, although I still wish this was taking place during Grown Up Batman time where Batman himself occasionally reoccurs as a guest character. (Which is apparently the whole plot of a comic, Gotham Central, that I only found out about last week and now have to read.) Donal Logue is AWESOME as Harvey Bullock, and I really liked that scene with him and Gordon both hanging upside down in the freezer, all, well this could have gone better. I’m looking forward to seeing how their partnership unfolds. I enjoyed Jada Pinkett Smith as Fish Mooney, although I don’t anticipate her surviving past first season, and I thought Robin Lord Taylor was a pretty convincing and creeptastic Penguin. (The only other thing I’ve ever seen Taylor in was Would You Rather, where he was also a psychopathic little shit. I wonder if typecasting is going to be an issue for him.) And while I doubt anyone else cares, I kind of like that the show opened with Little Catwoman in what’s typically a very Batman shot. I’m curious to see what kind of relationship she and Little Bruce are going to form.

All in all, I think there’s material to work with here. We’ll have to see how it goes, but I’m hopeful this show can work out its kinks. Like the super clunky dialogue. Or the weird chase sequence action-cam.

Definitely Gordon and Bullock, waiting to be gutted. Although I was also impressed with Little Bruce screaming after his parents died — I was very happy it was a high-pitched, childish scream instead of some ridiculous Angry Roar that I would’ve laughed at.

This episode was decent, although I wasn’t particularly excited by it. As a season opener, I didn’t really feel like it accomplished as much as I wanted it to, although it did have a few pretty amazing LOL moments:

1. Headless Horseman firing a shotgun (because it will never stop being funny)

2. Realizing that Naked Benjamin Franklin is none other than Danny Concannon from The West Wing

I was also happy to see our weird subtitles back — how I have missed you, totally strange font. John Cho made a cameo appearance, which, YES! (Can Selfie get cancelled yet? I want him back.) And I’m always up for a good “there’s a storm coming” line. I mean, that will always make me happy. But I was really disappointed that they just got rid of the creepy Purgatory dollhouse, like that actually kind of bugged me. And oh my GOD, Katrina is a prisoner AGAIN? I was really hoping, after all this time off, Sleepy Hollow would have figured out a way to make Katrina interesting. Really, I would have settled for her simply pointing out to Asshole Abraham that she is not a thing that can be stolen. Instead, she remains the least interesting, useless, and most victimized character on this show, and my patience is wearing a little thin.

Probably the part where Ichabod realized his deathbed confession to Abbie didn’t record. Although I also loved the scene where she just straight up decapitated the thing pretending to be Ichabod because he said, “Lieutenant,” instead of ‘leftenant’. Jesus. I’m glad you didn’t just hear him wrong or anything, Abbie. I’m saying, if I decapitated somebody every time I misheard what they’d said, we’d have a LOT less people in Northern California. And I’d probably be in jail as a convicted serial killer.

Last year, I watched and reviewed all of the live-action Batman films prior to watching The Dark Knight Rises. (I will almost certainly review all of the animated films at some point, too.) Mekaela — who I might remind you still wants to see The Wolverine, despite the eternal sadness that was The Last Stand and Origins — suggested I do the same with the X-Men films.

I’m still not promising to watch The Wolverine, Mek. But here’s a look back at our first encounter with the glorious Mr. Hugh Jackman.

END_OF_DOCUMENT_TOKEN_TO_BE_REPLACED

When my friend Robyn came to visit, we attempted to watch Coons! Night of the Bandits of the Night, and barely made it through the trailers before giving up. (So, Rob? Congratulations. You broke me. I am a broken woman now. I hope you’re happy.)

We decided to watch this instead:

I have this poster on my wall, and though you can’t see it from the picture, it has the very best tagline ever. Said tagline?

Survivor Who Kill Everyone Even Though Best Friend.

This is a fair representation of the translation quality throughout the film.

END_OF_DOCUMENT_TOKEN_TO_BE_REPLACED

When it comes to James Bond, I’m fairly ambivalent. I find a handful of the Sean Connery movies enjoyable enough — Goldfinger might be my favorite, or at least the one that sticks out the most in my mind — and I actually like Casino Royale quite a bit. But I’ve never felt any need to go back and watch every James Bond movie. Sorta, you’ve see one, you’ve seen them all, you know? Also, I never really liked the Pierce Brosnan films very much, probably because I don’t particularly like Pierce Brosnan — I don’t know; it’s irrational — and despite being a fan of Daniel Craig, I never bothered to see Quantum of Solace and felt vindicated when everyone said it wasn’t worth watching. (I can’t get past that title; I just can’t.)

However, I had some interest in Skyfall, and more to the point, my sister really wanted to see it, so last week we finally got around to watching it. 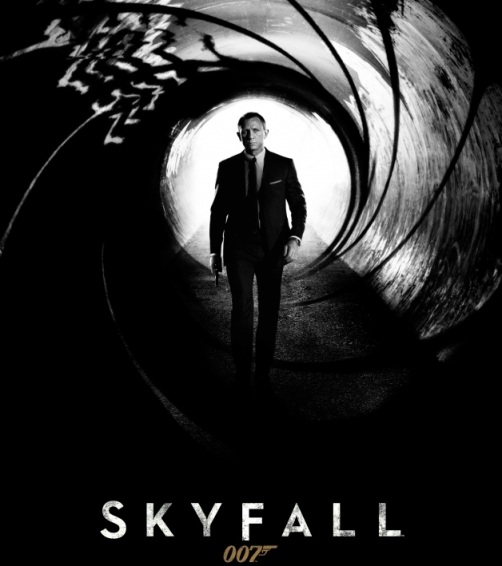 It’s definitely a fun movie . . . but I do have some problems with it.